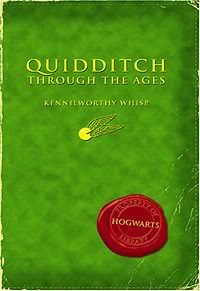 Having never read any J.K. Rowling books, I’d overlooked one of Tarapoto’s most famous literary exports – the Tarapoto Tree-Skimmers.

Quidditch Through the Ages by Kennilworthy Wisp (Rowling) was released in 2001 as a fund-raiser for Comic Relief in the UK. For those who have somehow managed to avoid Harry Potter, Quidditch is the game played by Potter and his friends in the best-selling series of books and films.

In Quidditch Through the Ages, Rowling elaborates upon the history of the game and the various teams from around the world. The Tarapoto Tree-Skimmers are, apparently, Peru’s most famous team and have recently toured Europe to great acclaim. Well there you go, you learn something new every day.

According to Rowling in a promotional interview, Peru are quite the up-and-coming Quidditch-playing nation: “At the moment, Bulgaria are pretty good. Ireland are very good and Peru, surprisingly, are also very good.”

Considering the current state of the Peruvian national football team, I guess any small triumphs should be accepted, even if they are fictional….