The Petroglyphs of Polish – Tarapoto, Peru 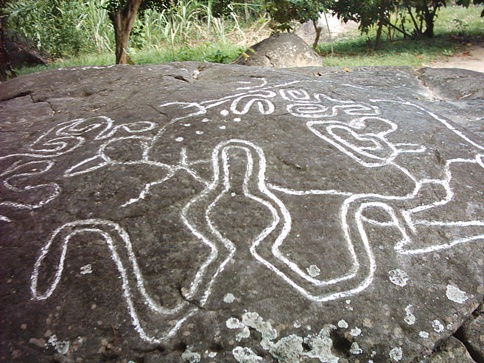 One of the Petroglyphs of Polish – A petroglyphic map?

The Petroglyphs of Polish are a little-visited gem just outside Tarapoto, Peru. Discovered in 1966, these rock carvings still remain a bit of a mystery. The site of the petroglyphs has a certain aura about it; 5 large rocks lie in the shade of a variety of tree species, the white lines of the petroglyphs (highlighted with mineral pigments) contrasting sharply with the greenery all around.

What are the Petroglyphs of Polish?

Various theories exist as to the creators of the petroglyphs. Some say that the Chachapoyas culture carved the petroglyphs, while others attribute them to Inca explorers. A more probable explanation perhaps lies with the tribes of the Pocras and Chancas who inhabited the area around Tarapoto. It was the Chancas who settled, and still inhabit (in part), the nearby town of Lamas. 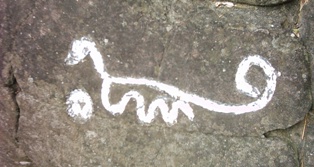 The petroglyphs themselves come in a variety of shapes and sizes. The most easily recognisable are the images of snakes, birds and plants. Other designs and patterns are not so easily identified. My personal favourites are the maps that have been carved into the stone – it’s believed these were created as a guide to travellers in the area.

Getting to these Fascinating Peru Petroglyphs

The petroglyphs are about 8km outside Tarapoto. It doesn’t cost much (about 5 soles if I remember correctly) to take a mototaxi out to the site if you go to the paradero on Jr A. de Alvarado (cuadra 3). Ask the driver if he’ll wait at the petroglyphs while you look around – they are normally quite happy to do so. The man who lives on the site seems to be the unofficial guardian of the place and he’ll show you around (Spanish only). There is no entrance fee, but I gave the guy a decent tip because he was really helpful (and let us take loads of fruit from his trees!).

If you ever want an English speaking guide for a trip to the Petroglyphs, send me an email via the contact form and we can probably work something out.