Tarapoto As I Remember It in the 1970s

The following article is a guest post by Vincent Tufano, a New Yorker with a Doctorate in Political Science who wrote his doctoral dissertation on Peruvian politics. Vincent is the author of Empires of Gold, an action-packed novel that spans over three centuries of Peruvian history and includes elements and locations inspired by his time spent in Tarapoto, Peru. Vincent Tufano took all the photos included in this article during his trip to Tarapoto in the Seventies. 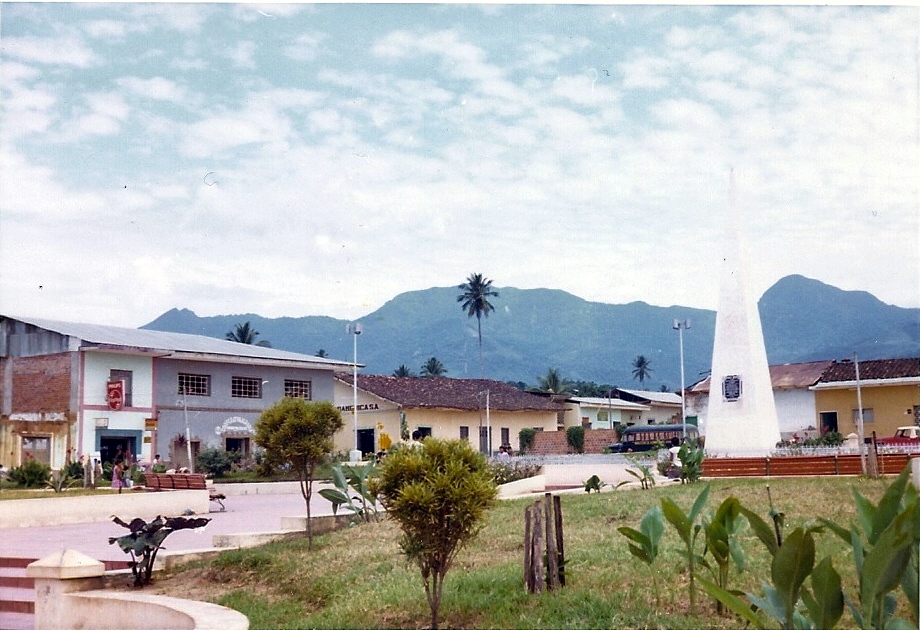 Tarapoto As I Remember It in the 1970s – By Vincent Tufano

My first trip to Peru was in October of 1974 when I arrived in Lima to research a Doctoral dissertation on Peruvian politics.  Shortly after my arrival, I moved to a very nice pension in San Isidro, a wonderful upscale neighborhood that was much nicer than where I had been living in the USA.  Fortunately for me, the pension was inhabited mostly by students who were young adults such as myself. Many came from distant parts of Peru in order to study in Lima.  I quickly became friends with many of them, and much to my delight was often invited to travel with them to their hometowns. In this way, I got to see many extremely interesting places in Peru that otherwise I may never have gotten to know.

One of my best friends at the pension was a very pretty 21 year old girl from Tarapoto named Teresa Sandoval. I had never heard of Tarapoto before I met her and she didn’t talk much about it aside from stating that it was in northern Peru, east of Trujillo just beyond the Andes in the Peruvian rain forest.  That sounded pretty exotic and interesting to me, so when Teresa casually asked me if I’d like to go with her to her home town for a two week period during the Christmas season to stay with her and her parents, I jumped at the opportunity. She told me that I should fly to Tarapoto a few days after she left Lima in order to make the necessary arrangements for my arrival.  As agreed, I arrived in Tarapoto at the appointed time. 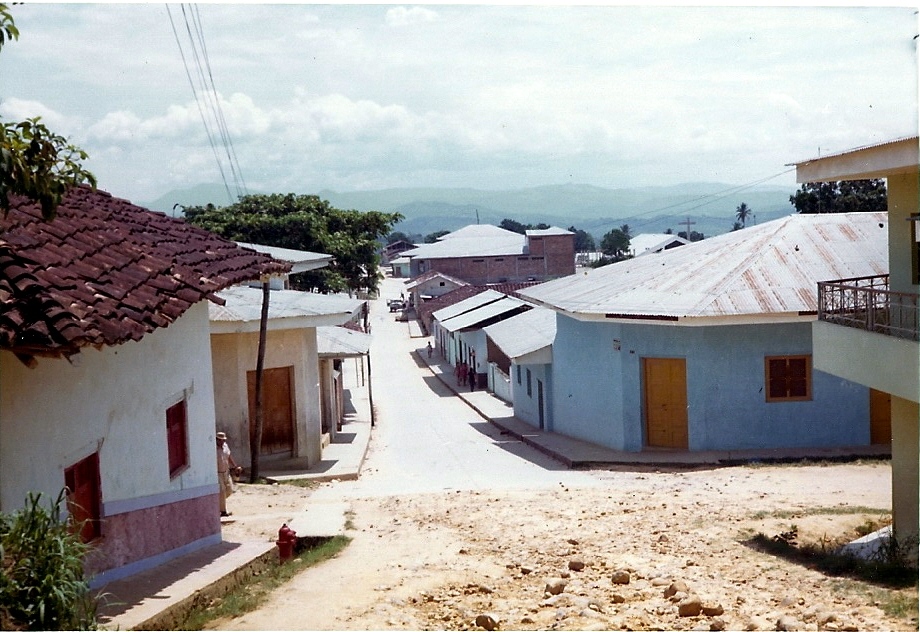 In those days, it was my understanding that there was no practical way of getting to Tarapoto from Lima by land and the only air route from Lima was to Trujillo and then east over the Andes to Tarapoto. This is what I did and it was a gorgeous trip.  It was very exciting flying over the towering peaks of the Andes and then over the beautiful lush green vegetation of the rainforest as the plane approached Tarapoto. As the plane landed, I could see many primitive looking adobe structures with thatched roofs. The airport terminal was a dilapidated little structure with crowds of people waiting to greet their friends and relatives as they got off the plane.  Fortunately, my friend Teresa was there waiting for me with her Dad and whisked me off to Tarapoto that was located nearby.

Tarapoto immediately impressed me as completely different from any other place that I had seen in Peru. First, it was extremely hot and humid and pretty uncomfortable for me since I had grown used to the much milder Temperature of Lima. The people and the buildings also appeared quite different. On the way from the airport, all of the buildings seemed more or less the same – adobe structures with thatched roofs – pretty primitive by Lima’s standards. The people also appeared different. Their complexions seemed darker, they also seemed a bit taller and thinner than the Limenos, and the women seemed much more attractive.

Tarapoto at that time, I was told, had a population of about 30,000 people.  Most of the houses near the main square, where my friend Teresa lived, were only one story high, had concrete walls and roofs made of pan tiles or corrugated metal. Actually, I recall hardly ever seeing any buildings in Tarapoto more than one story high. Also, the mode of transportation was quite interesting. I saw hardly any cars and most people either walked to where they had to go or took a motorcycle. In those days, electrical power was limited and after a certain time in the day, if you wanted electricity, it would have to be provided by an electrical generator that was personally owned. At that time, aside from the streets directly by the main square, practically none of the roads in Tarapoto were paved. I also remember that TV had still not arrived in Tarapoto in the early 1970s so family get-togethers were an extremely important part of life at that time.

I found my experiences in Tarapoto on the whole very satisfying. One of the things that impressed me most was how friendly all the people were. Teresa’s family members treated me royally and couldn’t do enough to make me feel at home. All of Teresa’s cousins immediately started calling me primo and acted as if I was a valued family member; even strangers were always very friendly and greeted me with a smile and always tried to be helpful. I was also greatly impressed by how beautiful the young women of Tarapoto were and how nice and friendly they always seemed to be. 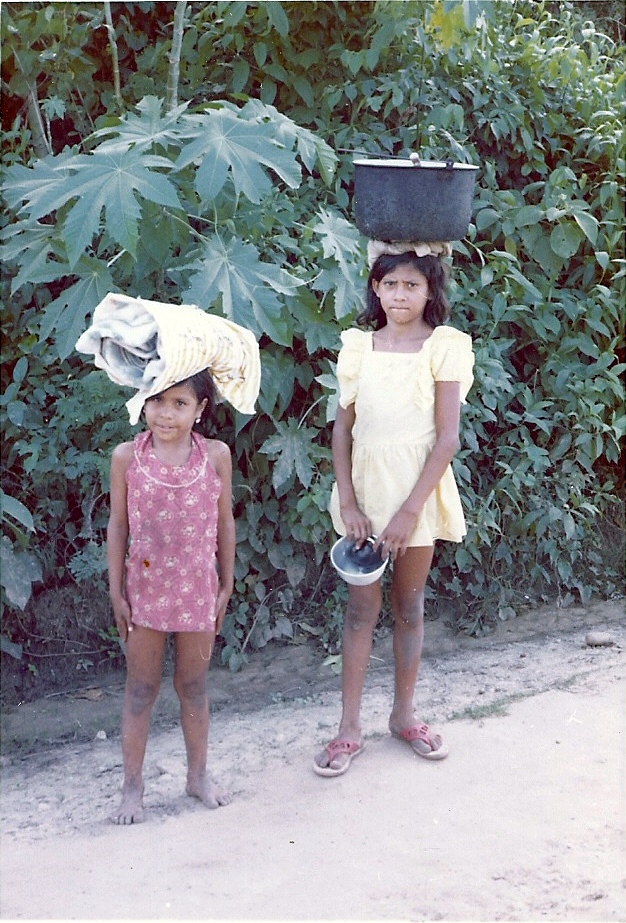 When I first arrived in Tarapoto, my friend Teresa told me that I would be staying in a room adjacent to the house where she lived, but we would be doing everything together during the day time. My first few days in Tarapoto were spent getting to meet her family and getting to know Tarapoto.  Fortunately Teresa had a motorcycle, and she spent endless hours having me ride with her on her motorcycle throughout Tarapoto and outlying towns and villages.  All of this was really quite interesting. Outside of Tarapoto, everything looked pretty poor and all of the homes appeared to be built by hand and made of adobe with thatched roofs.  People were always very friendly and quite often waved as this fair skinned stranger passed by in the motorcycle with Teresa.  I found it quite interesting to frequently pass by women or little girls in the road carrying things on their heads such as pots or other household items. I also commonly passed by men on horseback or mules laden with agricultural products such as wood or tobacco.

Onetime we passed through a little town and, as we departed, a little boy ran out waving a sign that said “Adios gringo”! On another occasion, we stopped by some thick vegetation where one of the campesinos cut me some fresh sugar cane to taste – and so sweet it was! Once we passed by a river where we heard some people speaking in English.  It turned out that they were Canadian missionaries who were spreading the gospel. Interestingly, they had devised a unique way to wash their Jeep. They simply drove their vehicle into the river and let the river current wash off the dirt and debris. Teresa also drove me to a very nice outlying town named Lamas which was a much smaller version of Tarapoto. What was especially notable about Lamas was that it was socially divided between two social groups, the more modern mestizos and the indigenistas who were the original inhabitants of the area and who still kept their traditional customs and modes of behavior, and who tended to segregate themselves from outsiders.

I really enjoyed the food in Tarapoto; I remember that rice wasn’t served with meals nearly as much as in Lima.  Rather, fried platanos seemed to take its place and they were served with practically every meal.  That was OK by me because I found them to be really delicious.  Fruits also were liberally served with the meals.  I don’t recall all the varieties that I ate, but I do remember that they were all delicious and different from those available in Lima.  I remember that electricity was in short supply and that Teresa’s mom once made a cake completely by hand, the batter and all.  Everything was hand mixed. It was quite labor intensive but the cake really turned out to be quite delicious, one of the best I have ever eaten. 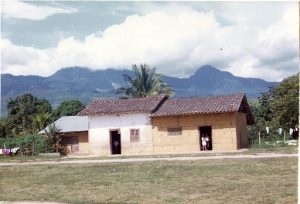 One of the other great things that I ate was the turkey that we had for Christmas dinner. A week before Christmas, Teresa’s Dad asked me if wanted to go shopping with him to get a turkey; I said yes expecting to go to some sort of market and buy a turkey already killed and plucked, but no.  We wound up going to a farm where Teresa’s Dad picked out a live turkey, tied up his legs, and brought it back to his home where it stayed in the corner of his kitchen for a week. Finally, just before Christmas, the bird was killed, plucked, roasted and then served for dinner.  I remember the turkey as being not too meaty but very, very sweet and delicious.

Another interesting experience that I had in Tarapoto took place during a day out when Teresa took me for a swim in the river. The water was fine, but having never gone swimming in a river before, I didn’t consider the hazards of water currents and almost wound up getting carried away into oblivion by the river’s strong current. Fortunately, I survived that ordeal and that was the closest that I came to disaster in Tarapoto. Actually, most of my time there was pure fun.

I had been warned that if I went to Tarapoto I probably wouldn’t return because I would probably hook up with some beautiful exotic girl there and decide to stay. Well, that almost happened.

The girls and young women of Tarapoto are really beautiful and I found them so sweet and nice that I almost did decide to stay.  After being in Tarapoto only a few days I met one of Teresa’s cousins whose name was Siglia Hernandez.  She was so beautiful, with long jet-black hair and a dark olive complexion, tall with a thin but shapely body and a super sweet personality – I instantly fell in love with her. Unfortunately, she had a boyfriend in Lima and my Spanish at that time wasn’t too good. Under different circumstances, I could have seen myself spending an eternity with her.

After two great weeks in Tarapoto, my holiday in the Peruvian rainforest finally came to an end. I returned to Lima with a lifetime of wonderful memories and to this day I consider the time that I spent in Tarapoto to be among the best in my life. 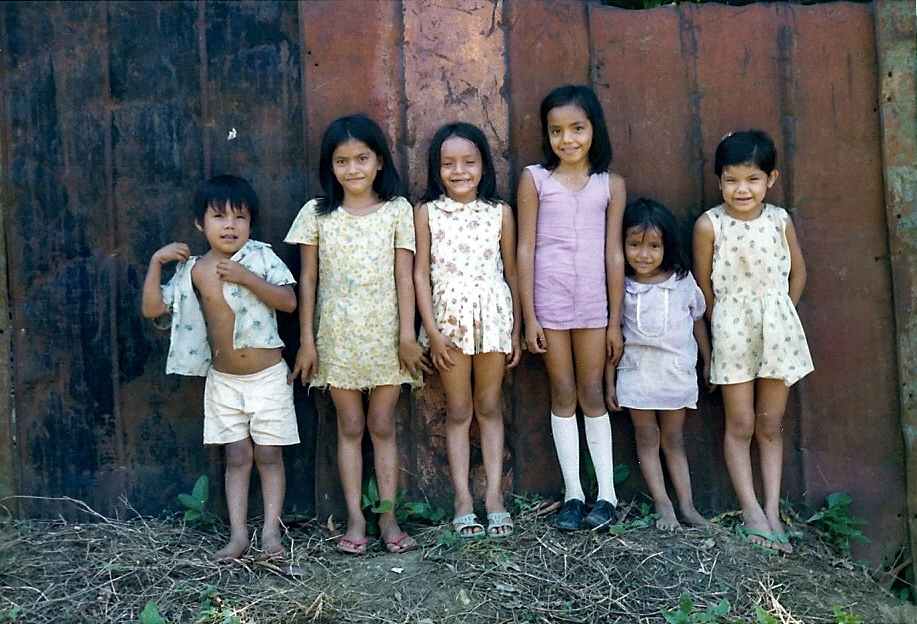 "They had followed me for blocks one day screaming "saca mi foto, saca mi foto". I finally agreed and managed to capture that wonderful picture. I wonder what those kids are doing now?" – Vincent Tufano