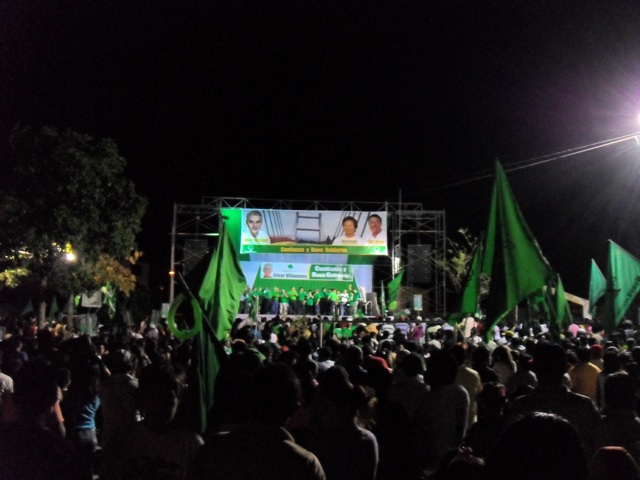 With regional elections scheduled for October, the Peruvian politicos of San Martin are doing the rounds. All the clichés can be seen in abundance: wild handshakes with beamingly false smiles, candidates helping old women across the street, babies being cradled in sincere voted-winning arms. The only clichés that cannot be seen are the backhanders, bribes and “favours” that some cynics say exist in Peruvian politics. Who am I to judge?

So, a few nights ago I went to the political rally of the Nueva Amazonía party. I was actually invited by an acquaintance of mine, the young “secretary” of one of San Martin’s mayors. The event took place up at the Concha Acústica, an open area in Tarapoto often set aside for fairgrounds and the like. I wasn’t expecting much, so was a little surprised to see a massed gathering of flag waving Peruvians.

To be honest, most of the gathered crowd seemed fairly uninterested in the proceedings. There was no beer on sale anywhere which could have accounted for the lack of enthusiasm among all but the most ardent supporters (family members).

All of the party representatives from their various constituencies in San Martin were introduced as they took to the stage. This lasted at least an hour, but was interspersed with a group of four dancing girls in vaguely traditional dress. There was a notable surge of young men towards the stage each time they appeared.

Hail to the Chief

After the lesser candidates had been introduced, the president of the Nueva Amazonía party, César Villanueva Arévalo, took his turn. With microphone in hand, Villanueva began a powerful, emotive rallying speech to his adoring fans; a speech entirely devoid of substance. There were a few themes touched upon during his hour-long speech. By “a few” I really mean three, maximum. Here are the kind of things he was shouting about:

That was it really. He had a little dance with the dancing girls at the end. Everybody on the stage clapped and waved and patted each other on the back. Then there was a sudden stirring in the crowd. Something was about to happen, something that seemed to be sending a ripple of interest through the assembled mothers in particular. Bingo! Yes, it was time for free bingo. Now I knew why there were so many families hanging around all night. I think the prize was a motorbike but I’m not too sure. I was too busy looking for beer at that stage (didn’t find one, the place was totally dry).

I left at this point, having had a good look at local Peruvian political posturing. It was quite reassuring really – it was just like political campaigning in any other part of the world….

To be honest, Villanueva did talk about more than three things – I was at times a little distracted by the dancing girls.