Tarapoto celebrated its 228th anniversary on the 20th of August. The proceedings were a little bit more colourful than the Independence Day march, but there was a notable shortage of carnival floats (only four in total, five if you count the guy in a hat sat on top of a truck). Anyway, this is a few weeks late but here we go: happy anniversary Tarapoto! 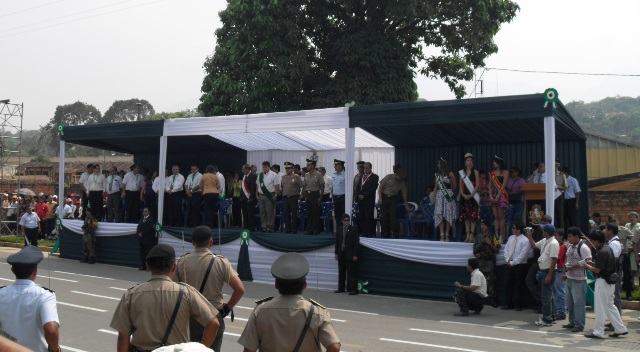 Events began with all the Tarapoto bigwigs sat up on a stage draped in the Tarapoto colours. Those military types in the foreground did their strange hopping march (think Monty Python) before raising the flags of Peru and Tarapoto. Anthems followed. Miss Tarapoto and the two humble runners-up stood proud. 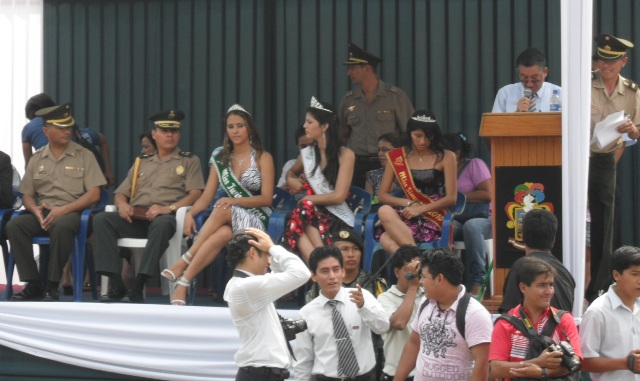 The three recently nominated Misses of Tarapoto. In the centre we have Miss Tarapoto, the beautiful Fernanda Koch Doria. To the right is Melissa Olenka Bravo Mori, now known as Miss Simpatía. To the left sits Sandra Torres Mego, who now bears the intriguing title of Miss Turismo. Those two officers looked quite distracted for the duration of the ceremony, but not once did they smile. Very impressive self-discipline, gentlemen. 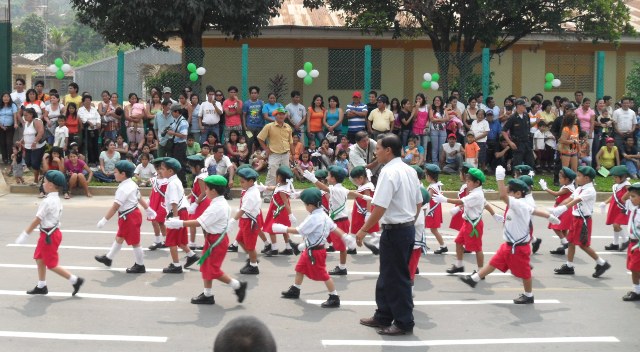 There are always militaristic undertones to these Peruvian parades – the whole marching side of things is kind of strange. That said, some of the little kids are hilarious. Their teachers try so hard to keep them all in good order but – let’s face it – it’s never going to happen. The day after the anniversary I saw a chat show debate about Peruvian parades on Television Tarapoto. The audience, made up largely of teenagers, was debating whether these parades should be more celebratory and less militaristic, less of all this marching business and fewer heavily armed soldiers. I’m not sure where I stand on that one, but it was interesting to see the youth of Peru questioning the issue (feel free to express your opinion below, it’s an interesting subject). 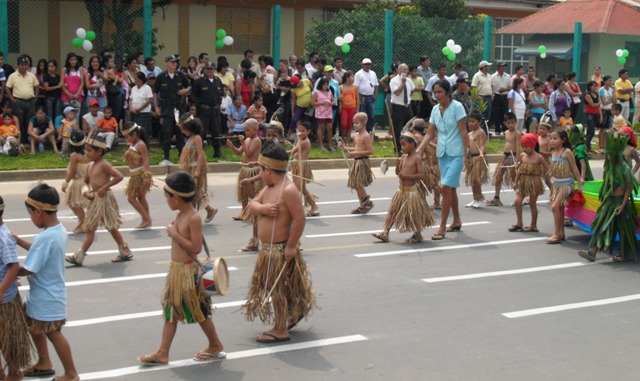 Now that’s what I’m talking about. Who needs guns when you’ve got bows and arrows? These kids advanced in a loose formation and looked like they were having more fun than some of the more regimented littluns. They were kind of like an urban Lord of the Flies, although these kids weren’t trying to kill each other in a battle for ultimate control of the streets. At least not from what I saw. 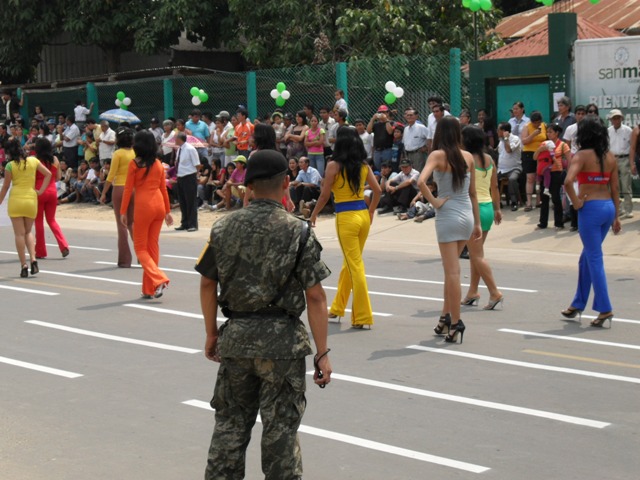 This soldier in the foreground was on crowd control duties. He was doing well, shouting and blowing his whistle at any spectator who dared place one foot off the pavement and on to the road. He was doing well, that is, until these ladies strode on by. He took his whistle from his lips, his bottom lip dropped fractionally, and he was transfixed for five minutes. I’ve no idea who these women are or what they were marching for, but everyone took the opportunity to dash across the street and reposition themselves while Officer Crowd Control was distracted. 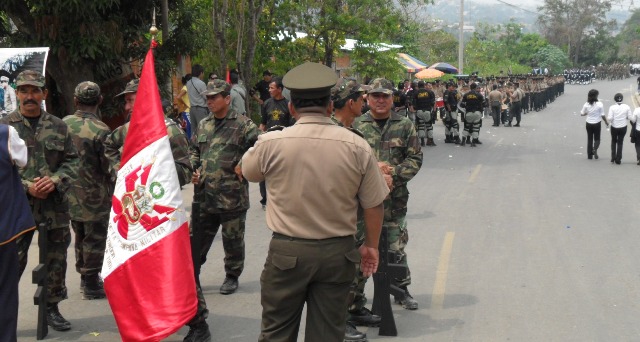 The Tarapoto anniversary parade was running late, so the poor old military guys and girls had to hang around at the bottom of the hill for ages. They finally took their turn and marched up the road in good order.

The floats started moving towards the town centre later in the day, at which point my camera had unfortunately died. The float carrying the three Misses was the focal point of the procession. Miss Tarapoto, Turismo and Simpatía did a good job considering that they had already been smiling and waving continuously for at least five hours. They smiled and waved some more as they were driven through the streets, finally ending up at the Plaza de Armas where a large crowd had gathered. Everyone drifted away after that, presumably to knock back a large number of drinks in honour of grand old Tarapoto, 228 years of age. Happy anniversary Tarapoto!