Beauty contests are a big thing in San Martin. It seems like every town and every village, no matter the size, nominates a Miss each year. There’s Miss Tarapoto, Miss Morales, Miss Moyobamba, Miss Tocache, Miss Wherever and so on. It’s kind of surprising that half the women aren’t walking around in little crowns with location-specific sashes hanging from their shoulders. It’s just as well really, because if these Miss Wherevers took to the streets on a daily basis, Tarapoto would begin to feel like The Stepford Wives. Permanent smiles, calculated movements, extreme pleasantness and eyes all wide and shiny….

Anyway, I decided to go to the Miss San Martin 2010 pageant a week or so ago. Upon entering, I managed to get myself a press-pass by showing a friendly official guy my little camera and mumbling something about being a writer. It worked like a charm; I got my pass and took my place right in front of the stage with all the professional photographers.

Behind me sat the judges, including Kilder Fuentes, President and CEO of the Peruvian American National Council (PANC). Two Peruvian TV celebrities were presenting the whole thing but, to be honest, I have no idea who they were.

After a few dance routines, the Miss’ess’es took to the stage en masse, confidently strutting their stuff in tight-fitting, slightly squeaky black PVC outfits. After this blaze of glory, the young ladies retired to prepare themselves for the swimwear round. One by one they appeared, each taking a couple of elegant laps around the stage, eyes wide and smiles impossibly wider, before striking a sassy pose and disappearing behind the curtain. Next contestant please: two laps, smile, pose, exit.

Between rounds the crowd was entertained by a singer from Lima (I think) who had just released the theme song for a new telenovela (again, I’m not sure, I wasn’t paying much attention). We also had the marvelous Thalia Tarapotina, Tarapoto’s resident drag queen. She’s actually quite funny, cracking rude jokes between slightly ironic songs and always getting a laugh from the crowd, a natural-born diva despite not being a natural-born woman. 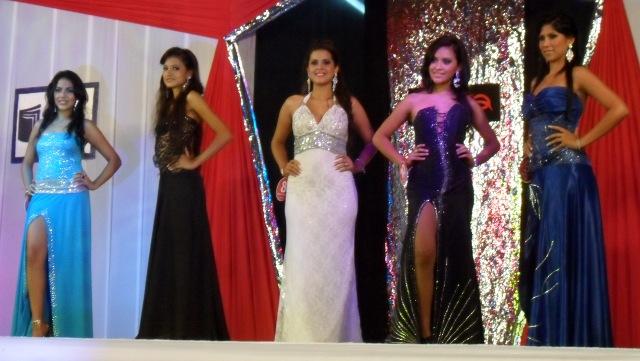 Next up was the eveningwear round, which also involved each contestant being asked a stupid question about world peace, gay marriage or the world’s water supply. The answers, obviously, were super-sweet and politically correct.

The funny thing about this round, and all the following rounds, was the choice of music. Blasted out over the PA system was Eamon’s “Don’t Want You Back.” For those not familiar with the song, here is the chorus:

f*ck what I said
it don’t mean sh*t now
f*ck the presents
might as well throw em’ out
f*ck all those kisses
they didn’t mean jack
f*ck you, you ho
i don’t want you back 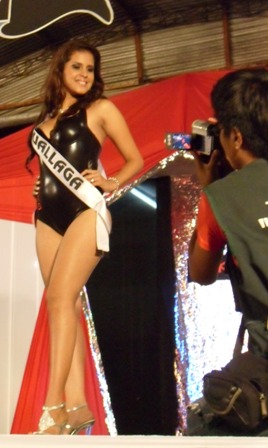 Now, I know that this is a Spanish-speaking nation, but I’m guessing there could have been a few people present who understood some of the words (Kilder Fuentes, for sure), especially after hearing it played on a loop for about an hour.

Anyway, it was all good fun. The contestants from Tocache and Rioja were my personal favourites, but sadly both were eliminated in the final round of five. The eventual winner was Sofía Cornejo Bartra, representing Huallaga. She was crowned by the majestic Miss Perú Universo 2010, Giulliana Zevallos.

As always with these Miss competitions, there was the obligatory scandal and/or conspiracy. According to Sanmartinenlinea.com, 8 of the 10 candidates were from Tarapoto, meaning that they didn’t really represent their supposed localities. Furthermore, one reporter was allegedly beaten up by security guards after trying to interview the candidates (that wasn’t me, by the way).

A writer must suffer for his art, and the Miss San Martin 2010 contest was certainly no exception. I had to stand for at least two hours during the beauty pageant, all the while maintaining a professional level of concentration so as not to miss the Miss’es’esses. It’s a tough life.

By the way, I also made a brief video of the contestants. However, I don’t want to include the video in this post as it might slow down the page loading speed, causing all kinds of technical problems and penalising my blog in the eyes of all the major search engines. OK, that’s a total lie. I did make a short video, but I’ve posted it on the new TarapotoLife Facebook page. This page currently has one member (me), which is kind of embarrassing. So, go have a look at the video if you want, and click on the “like” button while you’re there. Once you join the page you can start your own discussions, post your own photos and do a few other things besides (that’s the idea, anyway). Cheers! 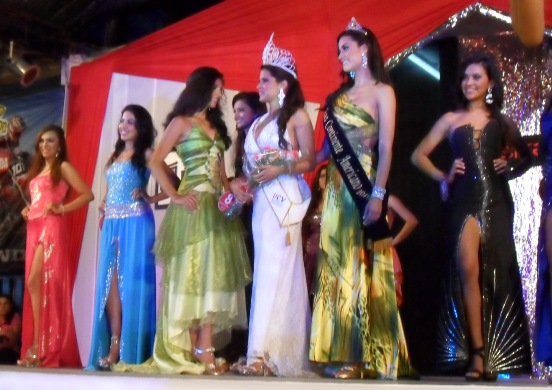