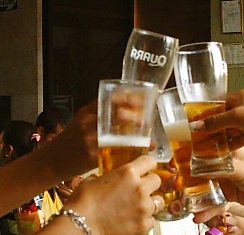 Tarapoto was alive with booming music and the sound of endless explosions as the sun began to set on 31 December 2010. There were major parties breaking out in all of the typical hotspots, from the discos down in Morales to the various recreos around town.

Entrance fees were pushing 60 to 90 soles for many of these locations, money that I prefer to spend on beer. With that firmly in mind, we accepted an invitation to a friend’s family gathering just a few blocks from where I live.

As soon as we arrived at our friend’s house, all the men gathered outside to go on a beer-buying run. We bought a couple of crates of Cusqueña (we wanted Pilsen, but the shop had run out) and headed back. In typical Tarapoto style, the party became a dance extravaganza within about 10 minutes, despite most of the guests being well over 60 years old.

Now, I’m not much of a dancer, at least not when I’m sober. I made the mistake of mentioning that to my friend, who made sure that his 10-year-old son topped-up my glass after just about every sip I took. This kid, by the way, had a vast stash of New Year’s Eve explosives that he was throwing or launching from the fourth-floor window. Seriously, he had enough fireworks, rockets and bangers to blow up a small ship – but then again, so did most of the kids in Tarapoto. This kid was launching his fireworks vertically into the night sky, horizontally across the rooftops of Tarapoto and directly down into the streets below. Chaos, basically, especially on the two occasions when the little rockets doubled back through the open window and shot across the heads of the dancing pensioners.

Speaking of dancing (again), at this point a particularly energetic granny grabbed me by the wrist and whisked me off to the dance floor. A slow, traditional dance would have been OK, but this white-haired woman had timed her grab carefully to coincide with a Brazilian Lambada. Fuelled by Cusqueña, I took to the floor majestically and everyone clapped and laughed hysterically. I smiled and reached for a refill.

New Year in Peru – The Move to La Granja

We all went up to the roof to watch the New Year roll in. Fireworks lit up all four corners of the Tarapoto skyline as the clock struck 12:00, and we celebrated with something optimistically called Champagne. The 10-year-old threw the rest of his explosives off the roof.

After this, some of us decided to head to La Granja, a recreo located just out of town (near Punta Verde). Free entry, a young crowd, busy but not overcrowded… the perfect spot to pass away the night. We met up with some friends and joined their table, bought a few beers and kicked back. There was plenty to watch while the night progressed. The requisite dancing girls were shaking their stuff on a nearby stage and the various dance floors were nice and active. It was a typical Tarapoto night, really – relaxed, laid back and friendly – and a fine way to start the New Year in Tarapoto, Peru.