I went back to the Petroglyphs of Polish a few days ago. It was a slightly odd experience because the man who looks after the place seemed to be talking nonsense. Previously, the guardian has been shy but informative, even if he did read most of the history from a piece of paper. I’m not sure if it was the same person this time, to be honest, but the information he was giving out seemed a bit strange.

Anyway, my previous post about the Petroglyphs of Polish only featured two photos so I’m going to post some more here, with added oddness included. 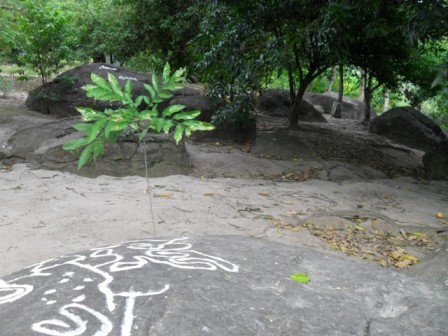 The photo above gives an idea of the site in its entirety. It is a shady spot with a series of boulders protruding from the bare ground. The petroglyphs are spread out across the individual rocks. 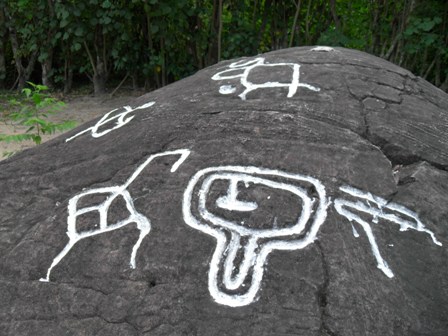 This boulder is tucked away in a corner, slightly apart from the others. It was the first we looked at, and it wasn’t a good start. Someone had obviously repainted the lines since my last visit (mineral pigments help make the petroglyphs stand out) but, as can be seen from the photo, they did a bad job. The paint is running down from the ideograms, making the whole thing look sloppy. I then asked the guardian to explain the designs to my friend. Bad idea. He started talking about extraterrestrials, saying that these particular petroglyphs represented aliens. I’ve heard various theories about this particular set of designs, and the general theory seems to be that they represent gateway keys to the underworld or spiritual entities. Otherworldliness, therefore, I can accept, but being told that they are pictures of aliens is a bit of a stretch. 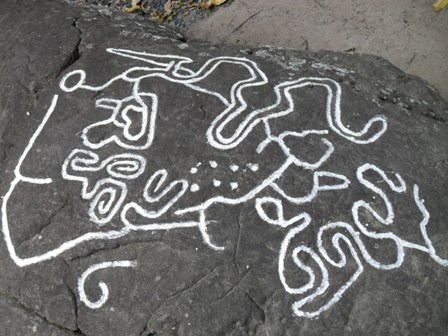 The “map”, thankfully, has been repainted with a bit more care. For me, this is the most fascinating of all the petroglyphs. The map theory makes sense, with rivers and trails marked on the rock to aid travellers in the region. The circles appear to be lakes releasing tributaries into the larger waterways. Alternatively, they could be settlements with trails leading from them, but the meandering nature of most of the lines does suggest water. The spiralling section (left of centre) is strange; it is not connected to the rest of the lines and doesn’t suggest a natural waterway. A trail winding up and around a series of hills? Debatable… 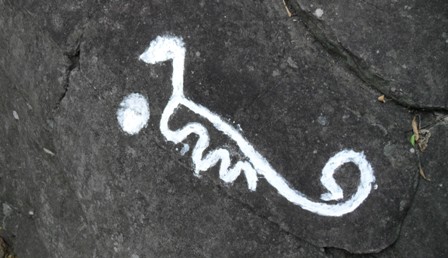 I asked the guardian what this was supposed to represent. Any guesses? Yep, a dinosaur, apparently. The previous guardian told me that it was a monkey, a far more believable theory unless there is some kind of “Land That Time Forgot” somewhere near Tarapoto. Granted, it does look like a dinosaur, but the petroglyphs aren’t that old. 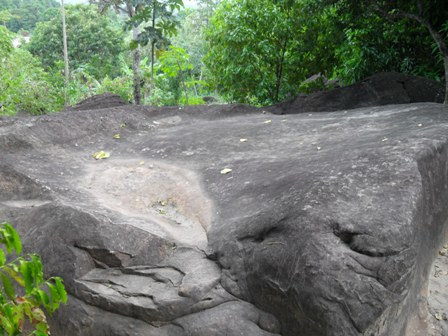 On my first visit to the petroglyphs, the site guardian told me that this flat rock perhaps served as a resting place for travellers. This time around, it was a sacrificial altar. Neither theory seems to be based on any solid evidence, making this structure quite intriguing. It certainly appears that the surface has been worn away deliberately, with raised sides and a run-off channel. The channel could be the result of natural erosion, but it does fire the imagination. Do you have any theories?