Keiko Fujimori reminds me of a Russian babushka doll. She’s nicely varnished on the outside, a sheen that gives her an approachable air – a caring mother who will give Peru the schools that it deserves. As for the inner shells… well, there seems to be a smugness in the second layer, not too deeply buried and occasionally seeping through to the exterior.

The next two incarnations remain something of a mystery, at least to me. But what about that smallest wooden figurine? Will Peru strip away those layers, only to find a tiny little Alberto Fujimori quietly manipulating the outer shell of his smiling, sensitive daughter?

Keiko Fujimori closed her presidential campaign last night (April 5, 2011) with a glitzy public party held at Tarapoto’s outdoor events area, the Concha Acustica. The whole thing was supposed to start at about 6 pm but, in typical Peruvian fashion, it kicked off about two and a half hours late.

Those two and a half hours were painful. A young comedian, tasked with keeping the crowd entertained before Keiko’s arrival, soon used up his repertoire of political impressions. Thankfully, he had an impressive collection of crude toilet jokes to fall back on. Some of them were actually quite funny, but he managed to end his overstretched segment with a slight faux pas (although no one seemed to think much of it).

His back-up jokes all revolved around “caca” (excrement, to put it politely). In a presumably unrehearsed moment of inspiration, the kid realised that “caca” and “Keiko” would make for a great bit of wordplay. “Remember,” he cried, “when you go to vote on April 10, think of caca and remember Keiko!” Probably not the most effective bit of word association ever invented on the campaign trail…

Light on Politics, Heavy on Pyrotechnics

The comedian lost his voice after about 30 minutes and made his exit from the stage. The next two hours were filled by the shouts of an enthusiastic liar. “Keiko! Keiko! Keiko!” he shouted, bravely trying to get the crowd to join in. He did an okay job, but two hours of that nonsense is pushing it a bit.

As for the lies… At 7 pm, he announced that Keiko was approaching the Concha Acustica. At 7.30 pm, he told us she was just minutes away. At 7.45 pm, she was due to arrive at eight. As it turned out, she was on the stage at about 8.30 pm. What a liar.

Anyway, the chance to see the glorious Keiko had arrived. She stood on the stage as the fawning Rolando, the party’s great hope for congress, gave us a few more minutes of “Keiko! Keiko! Keiko!” Sweet lord above, I thought, this is purgatory. Keiko herself stood motionless, her hands behind her back with the smugness of the second-layer babushka spilling across her face.

She then gave a very short, impassioned and slightly screechy speech about how she will give Peru more schools and universities and eradicate delinquency. Then she had a dance with Rolando. Then about 5 billion soles worth of fireworks shot up into the air, dropping ash and cardboard onto the impressively large crowd below. Then I left, desperate for a beer and some peace and quiet.

The Babushka of Peruvian Politics 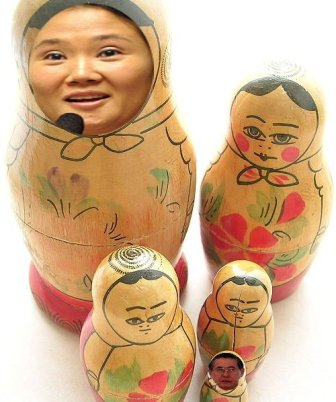 Would I vote (if I could) for Keiko Fujimori? Ideally, no, but she is certainly not my least favourite among the front-runners. The glitz and glamour of her closing party was impressive, and she handed out enough orange balloons to lift Bolivia to the coast.

But there’s something about the Bubashka that I don’t like, something unappealing behind her youth and those “beautiful eyes,” as mentioned in her hauntingly beautiful campaign song (it’s actually an old song by Dina Paucar).

To be honest, I think it’s the thought of that tiny little Alberto Fujimori sitting somewhere inside her that really gives me the creeps…

For a slightly amateurish video of Keiko in Tarapoto, head over to my YouTube channel and have a look at Keiko Fujimori in Tarapoto, Peru – April 5, 2011.