The following article is a guest post by Vincent Tufano, a New Yorker with a Doctorate in Political Science who wrote his doctoral dissertation on Peruvian politics. Vincent is the author of Empires of Gold, an action-packed novel spanning over three centuries of Peruvian history and including elements and locations inspired by his time spent in Tarapoto, Peru. 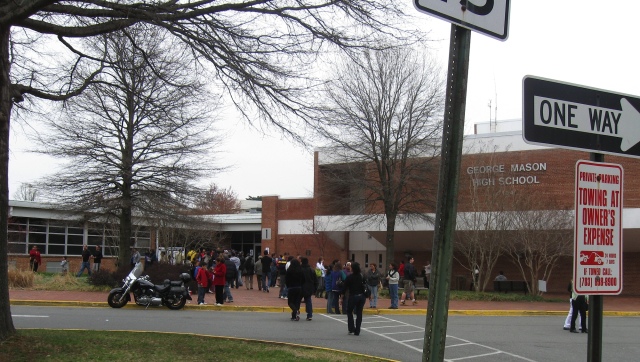 Peruvians Vote in the U.S.A.

Peruvians residing in the USA were able to vote for their country’s Presidential elections from a variety of places in the USA, depending on their place of residence.  The designated place for my wife to vote was in Falls Church, Virginia.  That turned out to be a mostly pleasant hour drive from our home in Baltimore, Maryland.

The roads were relatively empty until we reached the Leesburg Pike Road that brought us directly to the voting site. There, the traffic swelled to an approximation of a Monday morning Lima traffic jam. After crawling in traffic for a half hour, we finally arrived at the George Mason High School and Mary Ellen Middle School where the voting took place.

Fortunately, I had special license tags that allowed me to find a parking space a few seconds away from the schools.  For those not so fortunate, they wound up parking a pretty long distance away, and had to trek by foot to the schools. Once there, they were directed to the proper voting tables that were determined by the numbers appearing on their Peruvian ID cards (the DNI).

For those who couldn’t figure that out by themselves, there were plenty of uniformed officials around to assist them. Everything seemed to run very smoothly and, aside from some initial confusion, everybody seemed to find the correct voting tables without major difficulty. 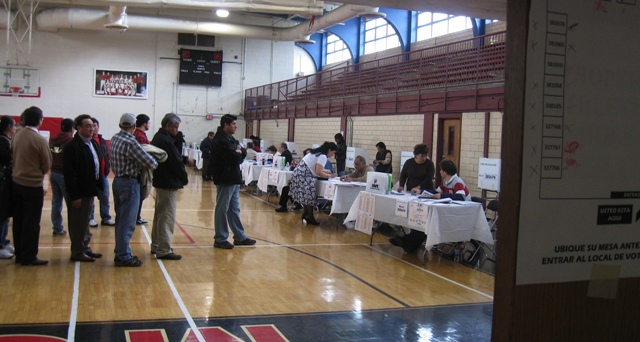 The whole voting process seemed to be a pretty laid-back affair.  Everyone appeared relaxed and not overly concerned with the electoral stakes. People calmly walked to the voting site, milled around, and engaged in conversation for a few minutes, voted, and then left.  For many the voting experience was a family affair. One commonly saw entire families, with infants being carried in the arms of their mothers or being wheeled in baby carriages, walking to the voting site. For those lucky enough to find the vendors across the street, they were able to bring the Inca Cola, tamales, and chicken and rice that they purchased with them.

Those voting seemed to be a microcosm of Peru; one could see the young and the old, the poor and the well-to-do all voting together in compliance with their civic duty. Interestingly, I didn’t see any partisans of any of the candidates campaigning outside the site of the elections in order to make last minute appeals to the voters. It seemed that all those who voted had pretty much made up their minds well ahead of time.  The impression that I had was that the poor of those present favored “Comandante” Humala (which is how they referred to him), while the more well-to-do Peruvians tended to vote for PPK.

We’ll find out soon enough who voted for whom when the final results are in. One thing, I believe, is for sure: while those voting in the Peruvian elections didn’t seem very animated or overly concerned about these elections, in Peru, many, especially the property owners, are terrified of a Humala victory and fear that they might be dispossessed should he win. For them, PPK seems like a safe candidate to vote for and tend to support him. On the other hand, Keiko, Toledo, Castaneda and the other candidates, combined, have considerable support and help to make the outcome of the Peruvian elections uncertain.

We’ll soon know who the final victor is. Whoever it is, I hope that the victor turns out to be a good one for Peru and will be able to surmount the considerable challenges that the country needs to overcome for its prosperity and well-being.