Peruvian Presidential Elections in the USA: Second Round

The following  guest post is by Vincent Tufano, a New Yorker with a Doctorate in Political Science who wrote his doctoral dissertation on Peruvian politics. Vincent is the author of Empires of Gold, an action-packed novel spanning over three centuries of Peruvian history and including elements and locations inspired by his time spent in Tarapoto, Peru.

Once again, I drove my wife from our home in Baltimore to Falls Church, Virginia so that she could vote in the second round of the Peruvian Presidential elections. This time, I decided to leave early in the morning in an attempt to avoid the traffic jams that I encountered the last time near the voting site. 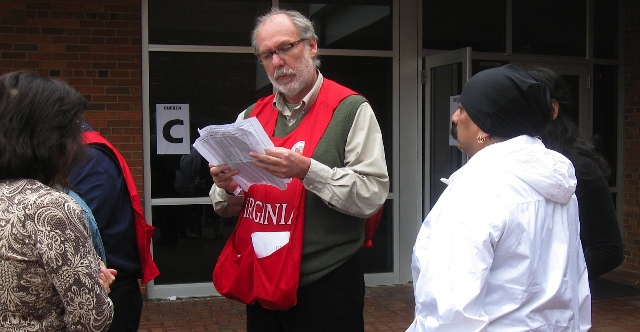 That turned out to be a good decision because there was clear sailing all the way. The trip from Baltimore was just a little over an hour and, once again, my special license plate tags allowed me to find parking just seconds away from the voting site.

My impression of the voting was about the same as it was the last time. Everyone looked calm and relaxed and no one outwardly gave the impression that anything of any great consequence was at stake. Just as before, it was common to see whole families, including infants in tow, going together to complete the voting process.  Everyone was dressed casually and, if I didn’t know better, I would have thought they were going to some ethnic festival or other entertainment site outside of Washington DC.

Peruvians Vote in the USA – Second Round

Everyone I observed seemed to have made up their minds regarding who to vote for. I didn’t observe any discussions regarding the candidates. The prospective voters, just as before, entered the building where the voting was to take place; they were directed to the proper voting tables, waited in line to vote, voted, and then left.  It was all a pretty straightforward and simple process.

Things might have changed later in the day, but in the morning, when I was there, that’s about all there was to the voting. I didn’t see anyone selling Peruvian food as I did the last time.

This time around, the choices for the voters were greatly simplified.  They had to choose between Ollanta Humala and Keiko Fujimori.  The most recent polls had the two candidates about evenly split. I was curious about what the feelings were of the Peruvian voters in the USA.  So, while some of them waited in line to cast their vote, I asked ten of them if they would mind telling me who they were voting for.

Of those I asked, six chose Humala and four chose Fujimori. When I asked those who voted for Fujimori, they basically told me that they had no great liking for Keiko but would never vote for Humala, who they considered to be a communist who would ultimately lead the country to economic ruin.

Those who voted for Humala told me that voting for Fujimori would be the same as voting for her father. Despite whatever reservations they might have about voting for Humala, they preferred him as President than the close family member of someone who has been proved corrupt and the killer of innocent people.

The results of my informal poll surprised me since I thought that Keiko would have edged out Humala.

A President to be Proud Of?

I have no idea what the final outcome will be, but I’m sure of at least one thing. US Embassy officials are now feverishly working overtime to figure out how to convince Humala to moderate his policies and not to endanger the interests of foreign corporations should he be elected.

I’m also pretty sure that both candidates are now at the edges of their seats, closely watching as the electoral results come in. It’s my personal hope that neither one of them would really be as bad for Peru as Mario Vargas Llosa has suggested – and that the ultimate winner has a clean and successful administration that all Peruvians can be proud of.