The Good, the Bad and the Karaoke 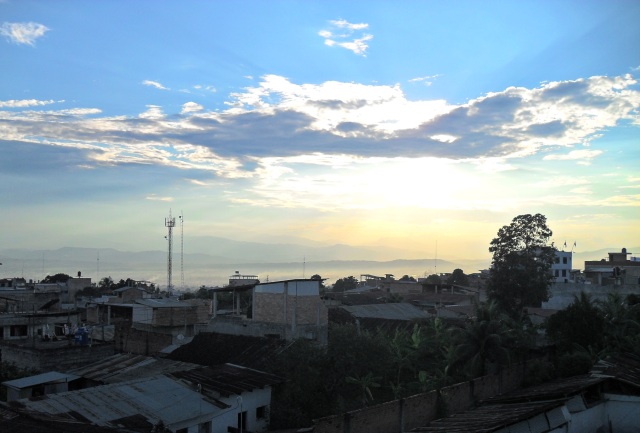 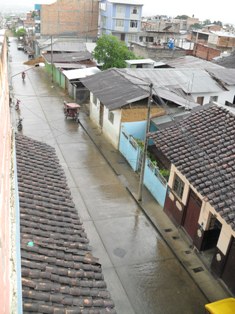 I truly love Tarapoto’s free and easy attitude. The ungodly rules and regulations that plague your every move in the UK do not exist here, at least not in terms of daily living.

Here you can go for a stroll in the street, dodging unmarked holes in the pavement, ducking under low-hanging blocks of concrete that hold up unruly curls of electrical cables.

It’s brilliant — there’s no one to sue if you break your leg or fry yourself on an exposed wire, so you just have to use some common sense and look where you’re going. Simple, really.

There is, however, one thing that can drive a man insane. Noise pollution, as the children’s entertainer aptly demonstrated, can drive you up the wall, round the bend and across somewhere where sane humans should not cross.

And I’m not talking about the buzz of mototaxis or the milk seller who shouts “leche, leche, rico leche” every time he walks past. Nor am I criticising the fruit seller with his megaphone, shouting “mangos, mangos, cocona, aguaje, mangooooos!” as he wheels his cart through the street.

Now, however, a new age of noise terrorism has dawned upon my street. Next door, in fact. Just below my window. And yes, it is that most horrific, unfathomable, most unfavourable of all human inventions: karaoke.

One of my neighbours purchased a karaoke machine about two months ago. The dread sound rose up like a screeching phoenix, filling the air with a concentration-sapping wail. “No problem,” I thought, despite my initial horror, “nobody can find karaoke fun for more than a couple of days.”

But woe, how wrong I was. Sixty-eight days, six hours and thirty-four minutes later, the entire family is still addicted to the infernal machine. There are precious few signs of a decline.

My spies inform me that there are three major players in this particular act. The drunken male baritone, heard occasionally between the hours of six and seven in the evening, is the father of the family. His singing is surprisingly bearable, mainly because his voice, unlike the others, does not penetrate through the brain, stripping cells from membranes while inspiring thoughts of high dives from bridges or nighttime strolls along the middle of the Pan-American Highway.

The two female voices, which at first I thought were one in the same, apparently emanate from two different people. This makes sense, as I had been wondering how this woman could afford to sing all day long (“Why doesn’t she get a f****** job?” is what I had really been wondering).

Whistle While You Work… Quietly, Please

As it turns out, the female owner of the karaoke unit only begins her session after 5 pm on weekdays (returning from work) and all day on Sunday. The day shift, as I’m reliably informed, is carried out by the family’s empleada, or house cleaner. She, like the machine’s proud owner, has a voice that could chill the balls off a polar bear.

Empleadas are paid very little in Tarapoto — often S/.100 to S/.200 ($35 to $75) per month — so it’s nice that she’s happy enough to sing while she works. But does she really need to amplify it for the whole neighbourhood to enjoy? I think not.

The thing is, the locals never even consider complaining about noisy neighbours. People can sing and shout and howl at the moon as much as they like, and as loudly as they like, and no one will ask them to stop. It’s put up or shut up.

This poor writer, therefore, must try to concentrate while listening to Hotel California being sung on a loop Peruvian style — by Peruvian women devoid of both vocal and multilingual skills:

Basically, I need to buy some headphones and listen to some soothing music while I work, or I’ll end up jumping out my window onto their tin roof, pummelling at it with my fists while shouting “Plenty of room, there’s plenty of room at the bloody Hotel California for the love of god!”

Either that, or I’ll get my mum to send me some bagpipes from the UK and I’ll launch a brutal, relentless counterattack… Would anyone complain about that? I doubt it.

The sun sets over Tarapoto as the Karaoke Queen does her thing. Badly.