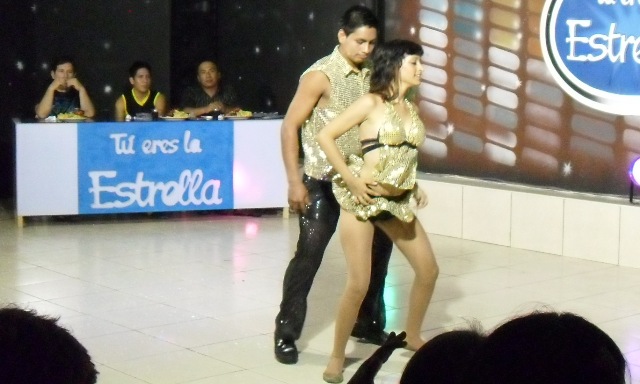 I couple of nights ago, I was dragged along to what I thought would be a school or college dance contest. I wasn’t too excited about the idea, but I had no electricity in my house (yet another power cut) so I went along anyway.

Much to my relief and joy, it turned out to be a televised stage of the Tú Eres la Estrella (You Are the Star) TV show, an American Idol rip-off produced locally. Now, I’ve seen this dance contest on TV and it’s normally quite entertaining. Not as entertaining as the singing version — in which most of the contestants sing like my karaoke-obsessed neighbour — but it’s quite good fun nonetheless.

There are three male judges, two of whom are reasonably polite and helpful while the third (sitting to the left) takes on the Simon Cowell role: mean, pouting, slightly camp. When I went, there was also a guy dressed as a giant chicken, but that’s fairly standard in Peru. 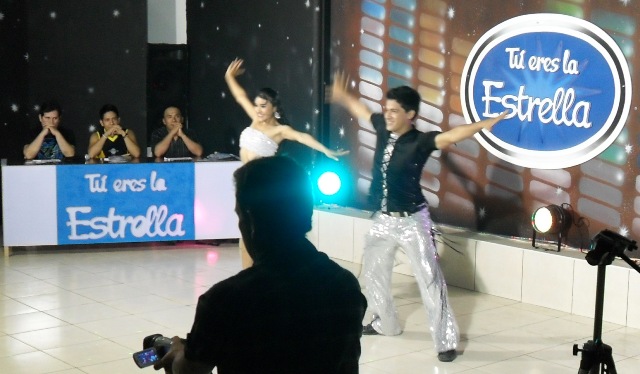 Anyway, four young couples went head to head in what turned out to be the merengue round. I’m not much of a merengue expert, but the couple pictured above quite rightly received the highest scores from the judges. Not only had they perfected the art of the fixed smile, the young lady was also the only competitor to take to the floor in high heels. That is impressive.

These talent shows always need a little bit of drama. Things almost got off to a flyer when one of the guys jumped in the air and narrowly missed landing on his partner’s head as she slid unceremoniously between his legs. It was all a bit of a mess, but she walked away with her head still attached so no great disaster.

The couple above, meanwhile, provided oodles — yes, oodles — of diva-like drama. They obviously didn’t know how to dance merengue, preferring instead to break out some raunchy reggaeton moves. Well, she did — he just walked around without doing much of anything, a fact that Simon Cowell savagely criticized after their performance. The girl walked off in a huff, refusing to talk to her poor partner, who stood around looking glum for the rest of the night (that’s not easy to do in shiny black trousers and a sparkly golden vest — believe me).

It was all good fun — I might even go watch it again sometime. If anyone is coming to Tarapoto and would like to join me, let me know in the comments section below and I’ll find out when the next live installment of Tú Eres la Estrella will take place. 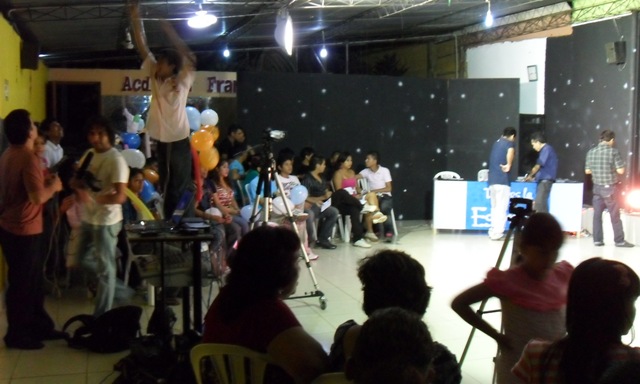