Monsefú and the Quest for the Best Ceviche

In my quest to find an alternative to the good but not exceptional Pollo Marino (near the main square), I’ve been asking the locals for cevicheria recommendations. Most have recommended Pollo Marino without hesitation, but a few other names cropped up, including Monsefú. 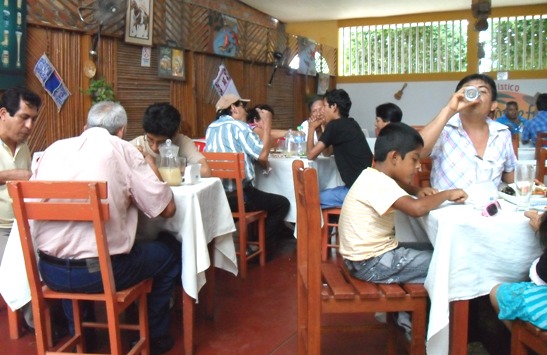 The Monsefú Restaurant in Tarapoto

Monsefú is located at Jr. Abancay 445, down in the Barrio Huayco (in the lower end of Tarapoto). It sits on a wide but nondescript street, well away from the buzz of the town centre. The quiet location doesn’t appear to be a major problem in terms of customers — the place was reasonably full when I walked in at about 1.30 pm on a Sunday.

A smiling waiter quickly approached, asking where we would like to sit. There were plenty of options — Monsefú is a big, high-ceilinged establishment with two large rooms, both packed with wooden tables and fringed by rustic decorations. Despite being quite dark inside, the restaurant has a comfortable atmosphere.

Seated, our attentive waiter quickly brought two menus and a plate of cancha (toasted corn). The cancha was the best I’ve ever tasted. The only drink left was chicha de jora, a type of fermented maize drink. Like the cancha, the chicha was exceptional (chicha de jora, when poorly prepared, is disgusting). Things were looking good, so the main meal promised much…

We ordered a ceviche mixta and a jalea mixta (typically, a mountainous plate of battered or breaded seafood served with fried yuca). I have a slight obsession for the latter, so I know it well. Pollo Marino does a decent jalea mixta, but it could be better (the best I’ve ever had was in Lambayeque, but it’s not really fair to compare coast with jungle when talking about cevicherias).

The food arrived in good time. Taste buds jangling in anticipation, we dug in. And we were disappointed.

Yep, despite the good start, Monsefú was a letdown. The ceviche mixta was average, especially considering the S/.17 price tag. As for the jalea mixta, it was the worst I’ve ever had. The batter was heavy and oily, similar to the batter used on cheap Chinese sweet-and-sour pork balls, obliterating the taste of the individual chunks of seafood within. The large slab of battered fish beneath the smaller nuggets was soggy, tasteless and riddled with bones. At S/.27, this was enough to make a grown man weep into his fermented maize.

If you’re on a diet of toasted and fermented corn, then I highly recommend Monsefú. If not, stay clear.

Monsefú doesn’t actually bill itself as a cevicheria, despite the large number of fish dishes on the menu (they also prepare duck, goat and other meat dishes). In fact, Monsefú seems to be in the midst of an identity crisis. Its full title is “Recreo Turistico Monsefú” — recreos turisticos normally have a swimming pool and a few games areas, but Monsefú has none.

I asked the young waiter why it bore the title of “Recreo Turistico…” He gave me a blank stare, seemingly pondering the issue for the first time, and, after a pause, said, “I don’t know, we don’t even have a swimming pool.” Oh well.

The Quest Continues: Recommendations, Anyone?

I mentioned my Monsefú experience to a few of my neighbours. They said it was a good place back in the day (it’s an old establishment), but it’s gone downhill in recent years.

So, the quest continues… Next up is Cebicheria Waikiki, as recommended by my friendly local shopkeeper. I’m wide open to all Tarapoto cevicheria recommendations, so please give me any details in the comments box below. Cheers!