A Sensible Hole in the Road 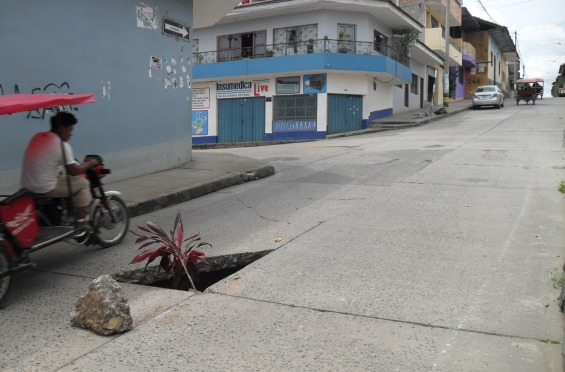 Is this the world’s most determined plant, freshly emerged from what should have been its dark and completely un-photosynthetic tomb? Sadly, no.

Despite appearances, this is not the plant kingdom’s equivalent of The Great Escape. What you see here is a completely sensible, 100% biodegradable road sign put in place by a concerned citizen. Along with a great big chunk of rock.

You see, this is sensible road management. Yes, you could rush to shut down the entire thoroughfare, spreading out cones and yellow tape to ward off accidents, forcing traffic to take a detour, choking the surrounding roads and making people irritable and late.

But why bother? There’s plenty of room to the right of the gaping hole. There’s sufficient space for a mototaxi to the left. If you end up in the hole — having somehow ignored the gently swaying plant and the ominous rock — then you have no right to be on the road in the first place.

The local authorities began repairing the road about 24 hours after I took the photo, at which point they did break out the yellow tape. Until that time, traffic slipped past the fissure quite happily. There were no broken bones or protests or, as far as I’m aware, irate telephone calls to the mayor. No one even tried the old “I slipped on your wet floor so give me one million dollars” trick. Admirable.

It’s a healthy attitude and one that warms my heart: “We’ll fix the road soon. Until that time, the road shall remain open. Please drive to either side of the big rock, the plant and the gaping hole. If you end up in the hole, you’re an idiot. We have faith in you.” 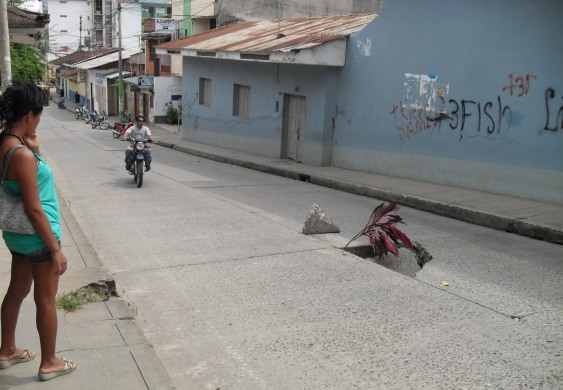 The young Peruvian lady to the left has, I can assure you, heard a thing or two about British "compensation culture." I wonder what she's thinking...?