Talking to a Tap in Spanish 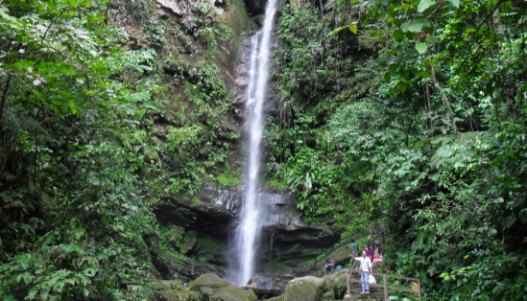 If you have arrived at this article after searching for “tap in Spanish,” here is your answer: “tap” (faucet) is grifo in Spain or caño in Peru. “To tap” (strike lightly) is dar un toque (give a touch) or dar un golpecito (give a little hit or knock). This article is about physically talking to a tap, so you may now stop reading.

I though this picture of the Ahuashiyacu Waterfall would be more interesting than a photo of my tap. I wouldn't say that to my tap, of course.

If talking to yourself is the first sign of madness, then I should have myself committed. Just moments ago, I found myself talking aloud to my slightly dripping tap — in a foreign language.

Why Was I Talking to a Tap?

In desperate need of a cup of Altomayo coffee, I went to wash a mug beneath my one and only tap. To my great dismay, no water emerged from said spigot. This is a problem in Tarapoto, or at least in my neighbourhood, especially between the hours of 2pm and 4pm.

I do sometimes talk to inanimate objects, especially when I want something from them. So, I tried to spur on the obstinate faucet with a few motivational (and slightly pleading) words. “Come on tap, just give me some water, just a little burst, you can do it.” And lo, there was water! And it was good.

Why Was I Talking in Spanish?

As I began to wash my mug, two things came to mind. Firstly, why the hell was I talking to a tap? Secondly, I realised that I had said everything in Spanish. That kind of makes sense; it is, after all, a Peruvian tap.

But it was also one of those moments in which I became fully aware of thinking, not just speaking, in Spanish. It’s weird when that happens. I probably think in Spanish more often than I realise, especially when I’m in the presence of Peruvians, but I’m not normally aware of it. I mean, we don’t often think about what we’re thinking about while we’re thinking. Do we?

Anyway… God only knows why I’m writing about talking to a tap in Spanish. Therapy, I guess…