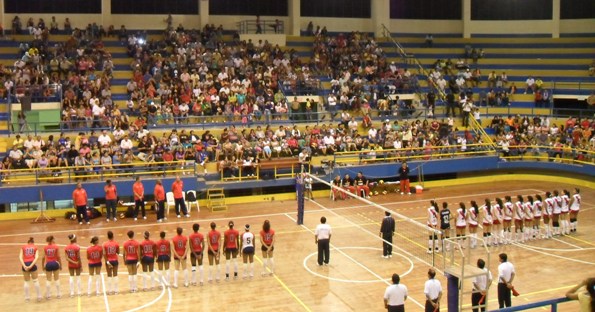 Until a couple of nights ago — June 27, to be precise — I had never watched a live volleyball game (not a “proper” game, anyway). I’d also never been to Tarapoto’s Coliseo Cerrado “Bicentenario.” So when Peru’s youth volleyball team rolled into town to face the Dominican Republic, I jumped at the chance to check it out…

The Coliseo Cerrado in Tarapoto

Earlier this year, there was a bit of controversy flying around regarding Tarapoto’s main volleyball venue, the Coliseo Cerrado. The covered stadium was, supposedly, about to be abandoned and left to rot by the Instituto Peruano del Deporte (Peruvian Sports Institute). The IPD’s man in Tarapoto then refuted the claims, saying something along the lines of “Oh no, it will not be abandoned and left to rot, no, no, no!”

Anyway, going to watch Peru’s youth team was also a good reason to peek inside the Coliseo. I wasn’t expecting much from the stadium, so was pleasantly surprised to find myself inside a very respectable-looking venue. Bright, airy, decent capacity, nice domed roof, appropriately squeaky playing surface… all the hallmarks of a decent volleyball arena.

Good. Now for the game…

Yep, the 8:30 pm kick-off (volley-off?) was not quite adhered to. I guess it was approaching 10 pm by the time Peru’s young women went head-to-head with their Dominican counterparts.

There were two reasons for the delay. Firstly, the “girls against boys” exhibition game dragged on, delaying the main event. Secondly, volleyball players seem to require the longest warm-up sessions in any sport ever invented in the world ever. Ever.

Seriously, who warms up just to sing a national anthem (apart from Luciano Pavarotti)? 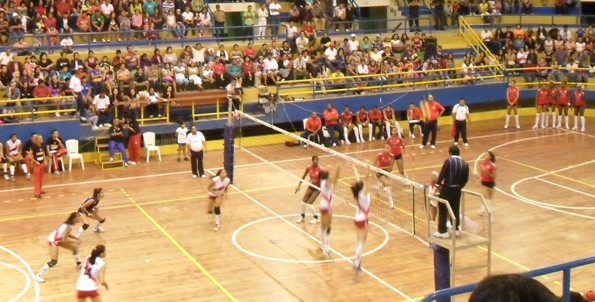 The woman standing courtside to the left of the photo is Natalia Málaga, winner of a silver medal at the 1988 Summer Olympics, coach of the youth team and all-round Peru volleyball legend.

The game finally began. It was good fun to watch, with Peru taking the first set 25-18. I would give an in-depth analysis of the match, but I really don’t know the terminology. And I left after the second set because I was hungry.

Sadly, Peru’s senior womens volleyball team did not manage to qualify for the upcoming Olympics in London, despite being ranked 17th in the world in the FIVB Senior World Rankings.