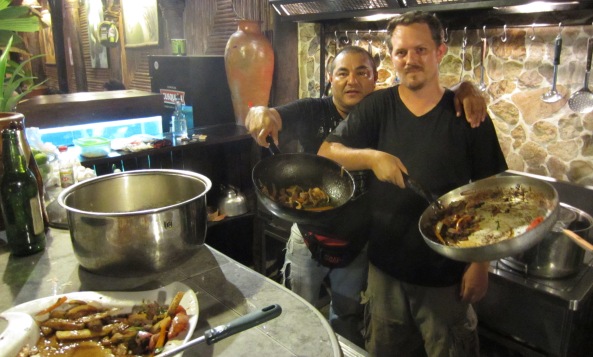 The 1st International Lomo Saltado Competition took place back in June 2012 (if anyone remembers the exact date, please remind me). Due to hangovers, laziness and a trip to the UK, media coverage of the event was delayed until the present time. Here, now, we present a recap of what will surely be remembered as a most historic moment in Peruvian culinary history… 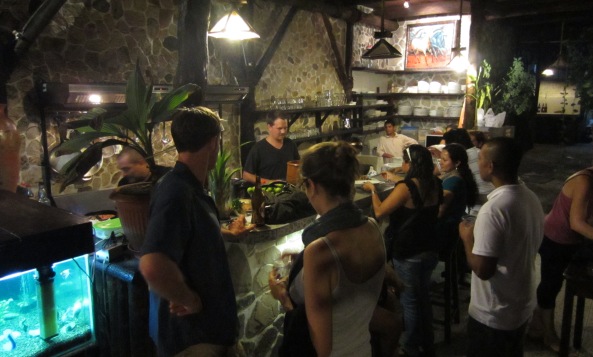 The idea for the 1st International Lomo Saltado Competition took shape slowly over the course of a few weeks, rising up like a hung-over phoenix from the overflowing ashtray of too many drunken nights.

The two main protagonists in this story are Evan Twomey, an American frog specialist with a passion for beer and pork products, and Jhonny Ciceron Espinoza Ruiz, a jovial tarapotino and owner of Mikuna House Restaurant and Grill (Jr. Miguel Grau 414).

Somewhere along the line, the two men had found themselves in the midst of a debate: how to prepare the perfect lomo saltado. This then shifted to who can prepare the best lomo saltado, at which point a head-to-head seemed almost inevitable in order to determine bragging rights.

And so was born the 1st International Lomo Saltado Competition, to be held at Mikuna House. This meant, of course, that Jhonny had home advantage. He also cooks for a living, something that Twomey does not, making the Peruvian a firm favourite against the upstart American. 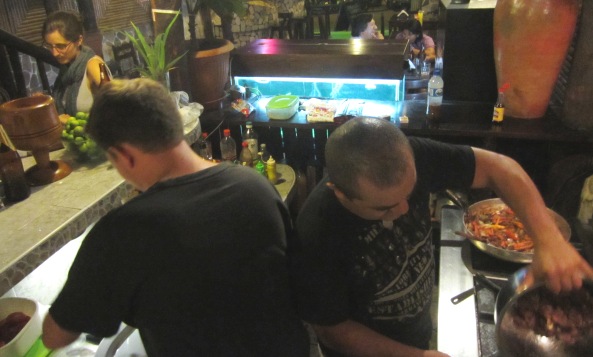 Despite cooking in his rival’s kitchen, Twomey appeared focused as he began to prep his lomo. The crowd itself included Canadians, Americans, British and probably some French, something that must have spurred on the amateur cook.

Jhonny, meanwhile, looked completely unfazed as he set about ordering his kitchen staff to chop onions, peel potatoes etc. This would normally count as an act of outrageous cheating, but no one had established any rules prior to the competition, a slight oversight that resulted in all manner of loopholes. The Peruvian chef readied himself for the business end of the cooking event by removing his T-shirt and covering his entire upper body with a homemade alcoholic lotion that was supposedly good for something.

Soon, both cooks were in the kitchen, shoulder-to-shoulder (shoulder-to-chin, really) and jostling for position. Flames spewed upwards as the succulent smells of frying meat wafted through the air. The crowd busied itself with the act of steady inebriation, a task they took upon themselves with great aplomb.

Twomey and Jhonny had initially agreed to both cook lomo saltado. By agreeing to a lomo saltado competition, that part would seem to be set in stone. Jhonny, however, went ahead and cooked his speciality, lomo al jugo (a much juicier version of the classic saltado). Twomey was slightly perturbed by this; being a sporting fellow, however, he let the Peruvian go ahead with his variant dish.

At some point in time — let’s say 9:47 pm — the two cooks had finished their dishes. Both men had outdone themselves in terms of quality and quantity, and the crowd was invited to sample both lomos. This was a key moment, as the assembled audience would also decide the eventual winner by means of a secret vote…

Both chefs looked on as their creations were slowly devoured by the gathered Peruvians, Canadians, Americans, British and probably some French. Twomey looked exhausted, his face red and forehead perspiring. Jhonny looked equally spent, a mix of perspiration and alcohol steaming off his robust frame.

Plates cleared, it was time to vote. Silence descended upon Mikuna House as each judge wrote the name of his or her favoured chef on a little piece of paper. These were then gathered in a hat for a final secret count.

Due to the presence of vegetarians and people who were either too drunk or too confused to write a name on a piece of paper, the final result consisted of 10 votes (less than the total number of potential judges). Well, I think it was 10 — I can’t remember precisely due to a lack of clarity caused by beer. I’m also having trouble remembering the exact vote count, but there was no question about the winner.

Against all odds, Evan Twomey claimed the title of 2012 International Lomo Saltado Competition Champion with what I think was seven votes to Jhonny’s three. His lomo saltado had wowed the crowd with its delicate flavours, precision palate and splendid choice of potato.

Jhonny Ciceron Espinoza Ruiz was valiant in defeat, accepting the decision with great composure and a hearty embrace for Twomey. History will record that both men battled to the bitter end; it will also record that Mikuna House was drunk dry by the judges.

The 1st International Lomo Saltado Competition was a success, and the true winner was lomo saltado itself, a dish that can be cooked by many but mastered by few. We now look forward to the 2013 event, to which you are all cordially invited… 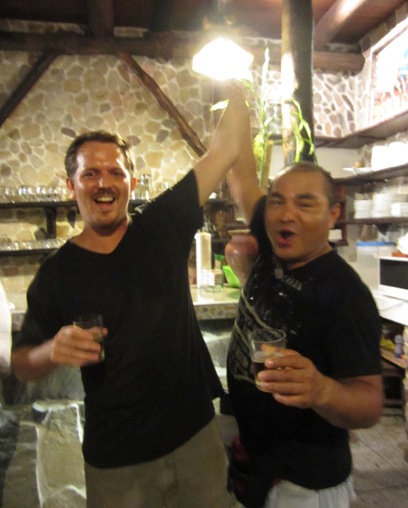 Jhonny raises the hand of his noble victor. Such was the respect and love between the two men, their hands melded together to form a ball of pure white light. Amazing.

If you want to cook your own lomo saltado, have a look at the following recipes: