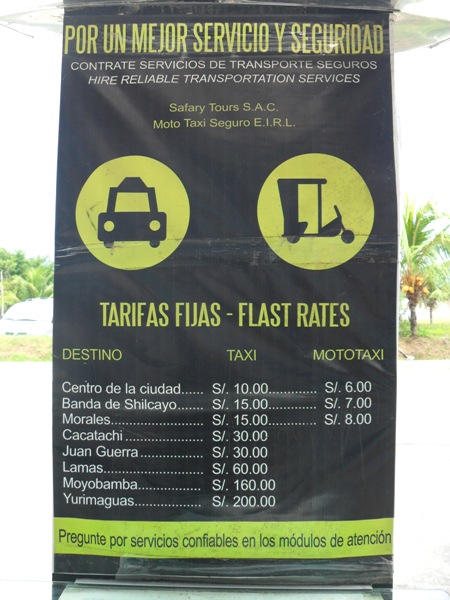 Back in the day, you could normally take a mototaxi from Tarapoto’s Guillermo del Castillo Paredes airport to the center of town for S/.4 or S/.5. That price could rise depending on the amount of luggage you wanted to lug into town and your negotiating skills, but otherwise it was fairly consistent.

These days, however, things are more regulated. Mototaxis and taxis within the airport car park now run on set fees, fees that are listed on a sign just outside the terminal (see image above).

These tarifas fijas, or “flast rates” as written on the sign (presumably like flat rates but faster), dictate that a mototaxi from the airport to the center of the city costs S/.6, while a mototaxi to La Banda de Shilcayo will set you back S/.7 and S/.8 to Morales.

That’s all fair enough — and the new system does help to ensure a safer journey. It’s a little annoying when the drivers consider the center of town to be only the plaza de armas (around which mototaxis can’t even drive); if you want to go somewhere just two blocks further on from the main square, expect the La Banda or even Morales rate. Feel free to haggle.

Of course, you can still walk out of the airport grounds and look for a ride on the street. But considering you’ll probably save yourself a sol or two, it’s not really worth it.

As for those taxi rates… S/.160 to Moyobamba? S/.200 to Yurimaguas? Presumably that’s an air-conditioned ride in a stretched limousine with a couple of escorts feeding you grapes all the way.