Random People Who Ring My Doorbell in Tarapoto, Peru 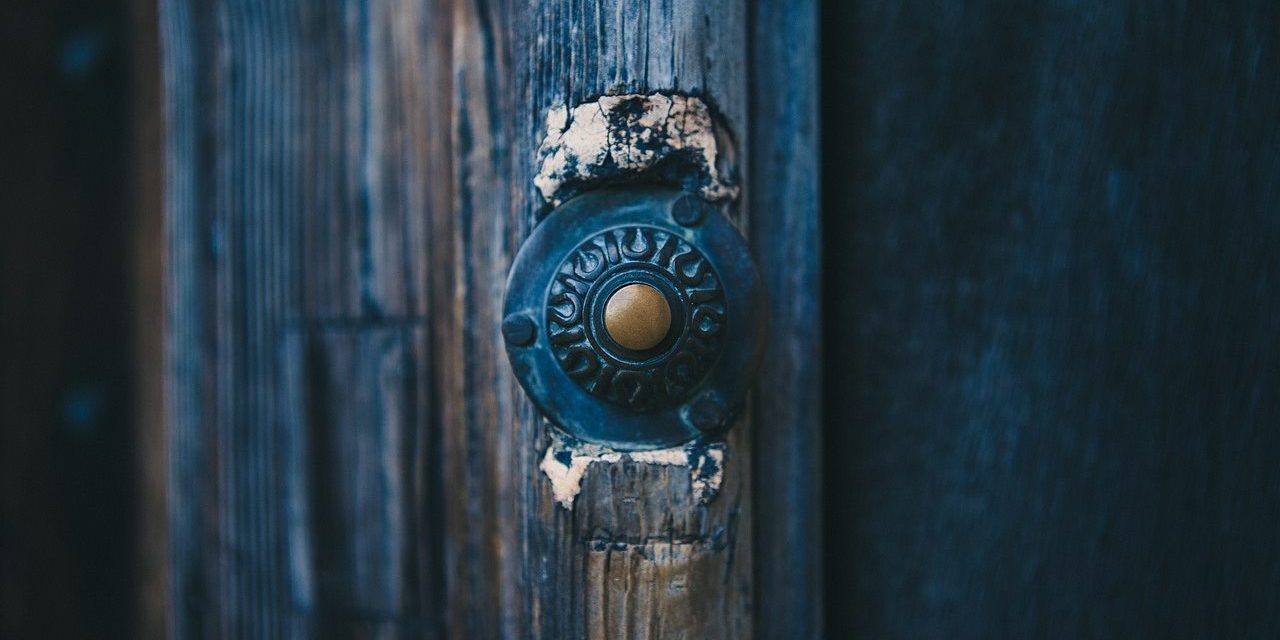 When my doorbell rings in Tarapoto, it’s not a pleasant sound. This is because people ring my doorbell who are not my friends. They are not the postman. They are not delivering requested provisions such as food or water or gas or beer.

They are the random people who ring my doorbell with consistency, perhaps weekly or only two or three times a year, who I’d rather, given the circumstances, not be ringing my doorbell at all.

Here are those people, ordered from least annoying to most annoying:

The Dengue Woman does good work. She works for the Ministry of Health. She comes round to sprinkle magic powder in plant pots and other receptacles to kill mosquitoes. Or mosquito eggs. Or larvae. Something like that.

I don’t mind the Dengue Woman. There are in fact numerous Dengue Women, but they are all the same. At first they are terrified of my dog, then they warm to him. They ask me if I have containers exposed to the elements that may contain old water. I say no. They are slightly flirty. They stay for a little too long, but that’s OK. Eventually I know they’ll sign and date the Dengue Paper stuck behind my door, and then they’ll leave.

Thanks, Dengue Woman. Anyone who fights against mosquitoes is one of the good ones in my book. I don’t love it when you ring my doorbell, but I do accept it. 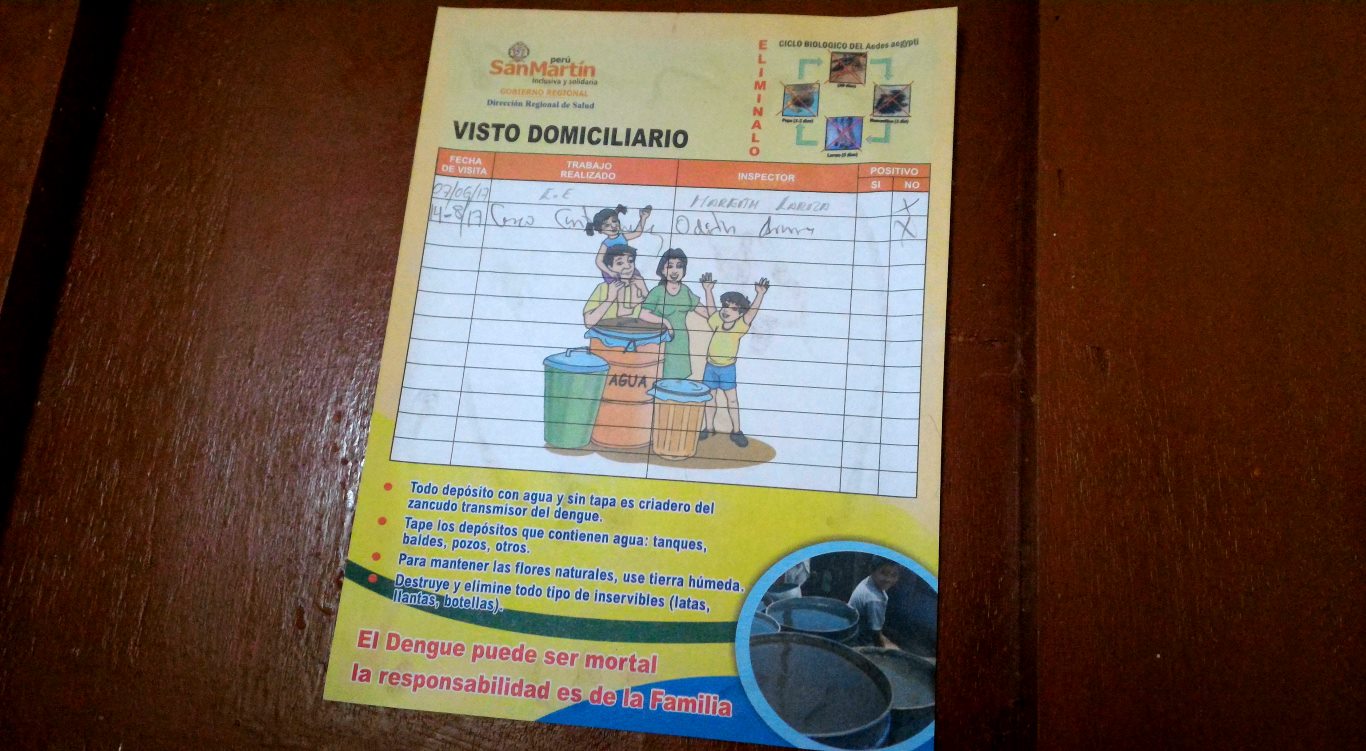 This is the paper behind my door that the Dengue Woman signs. It’s kind of cool, because the cartoon family actually looks almost Peruvian, rather than Scandinavian.

The Dengue Man lacks the subtlety of the Dengue Woman. He comes round maybe once or twice a year. The Dengue Man (there are many, but they are all the same) does not speak. He rings the doorbell and then just walks straight in, covered head to toe in protective gear and carrying a pesticide-spewing machine that covers everything in the house but apparently does no damage to humans, dogs, cats, computers, flat screen TVs or anything else that you might own or love.

The Dengue Man always reminds me of the scientists who come to take E.T. away. I just let the Dengue Man do his stuff. I wouldn’t want to annoy him. 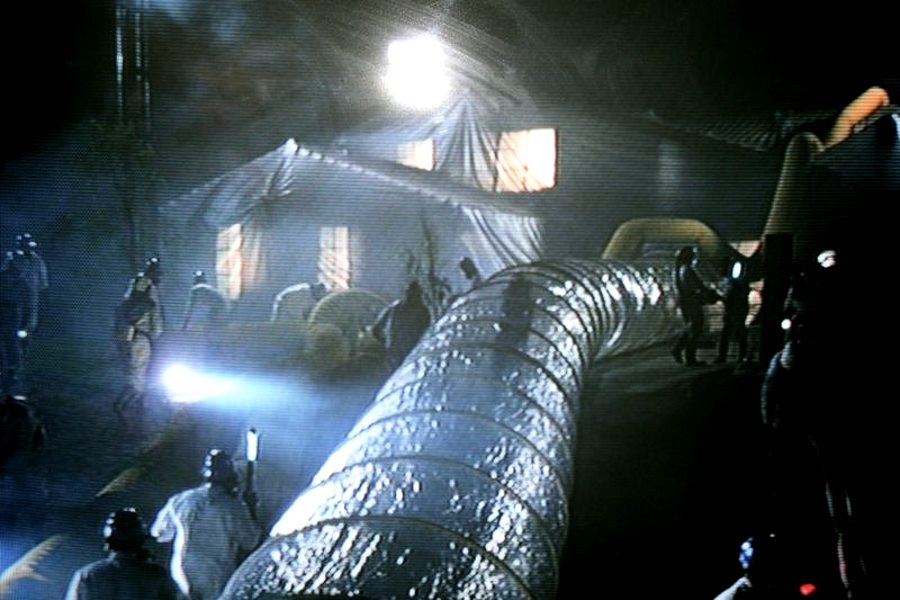 When the Dengue Man comes to my house, it’s just like this scene from E.T.

No, not my debts. Other people’s debts. And always from years and years ago. “Good afternoon, señor. We’re looking for Manuel Vargas Escapado Añosatrás. He lived here in 1998.”

Nope, sorry mate, I think you’re a little late for that one.

They never force the matter. They always seem totally unsurprised, as if they’ve been walking around Tarapoto for decades in a bureaucratic daze looking for the same guy, who they know perfectly well they’ll never, ever find. 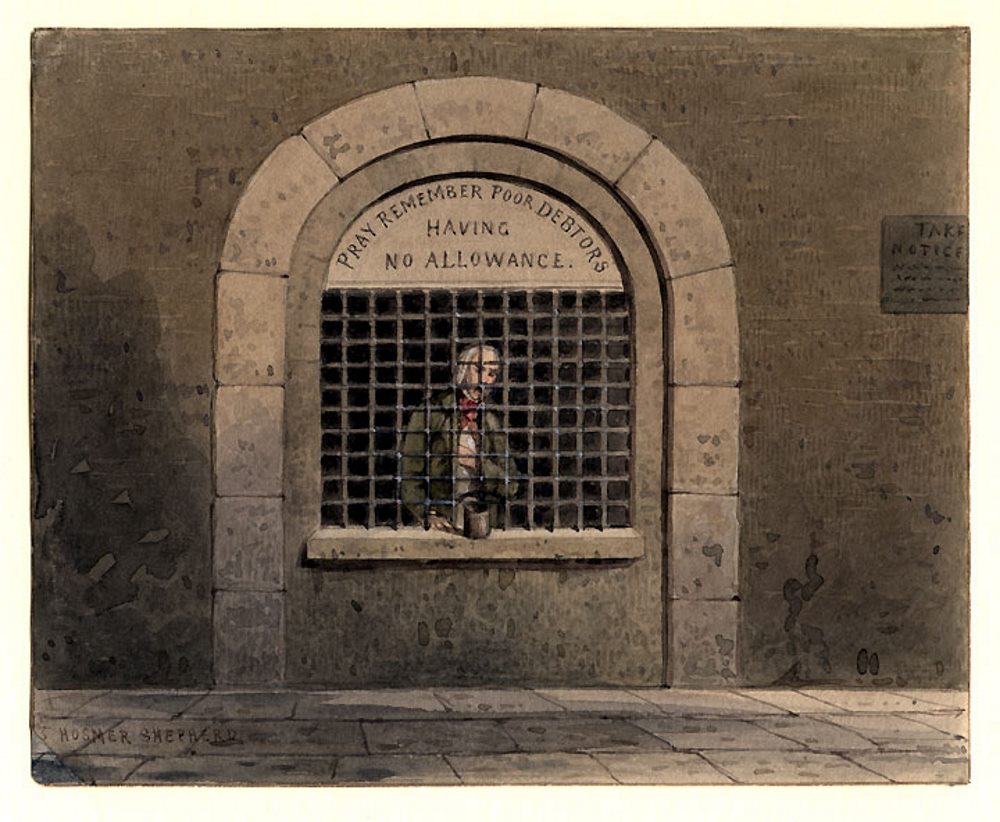 Debtors in Tarapoto disappeared about this long ago.

About five times a week between 4 p.m. and 5:30 p.m. my doorbell rings. And, as ever, my dog starts barking like a psycho. There’s never anyone at the door, so these days I don’t even bother going to answer between these hours unless it rings at least twice.

My theory is that local kids are ringing my doorbell on their way back home from school, specifically to hear my dog bark like a psycho. The little shits must be nimble, as I sometimes try to get out there quickly just to glare at the little bastards. But I never catch anyone within a reasonable distance for an assured scowl.

Also, I might be doing a disservice to the local kids. Knowing what some fully-grown men are like in this city, it could be an adult male ringing my doorbell and then running down the street giggling. But I reckon it’s kids. One day I’ll catch them. And scowl. 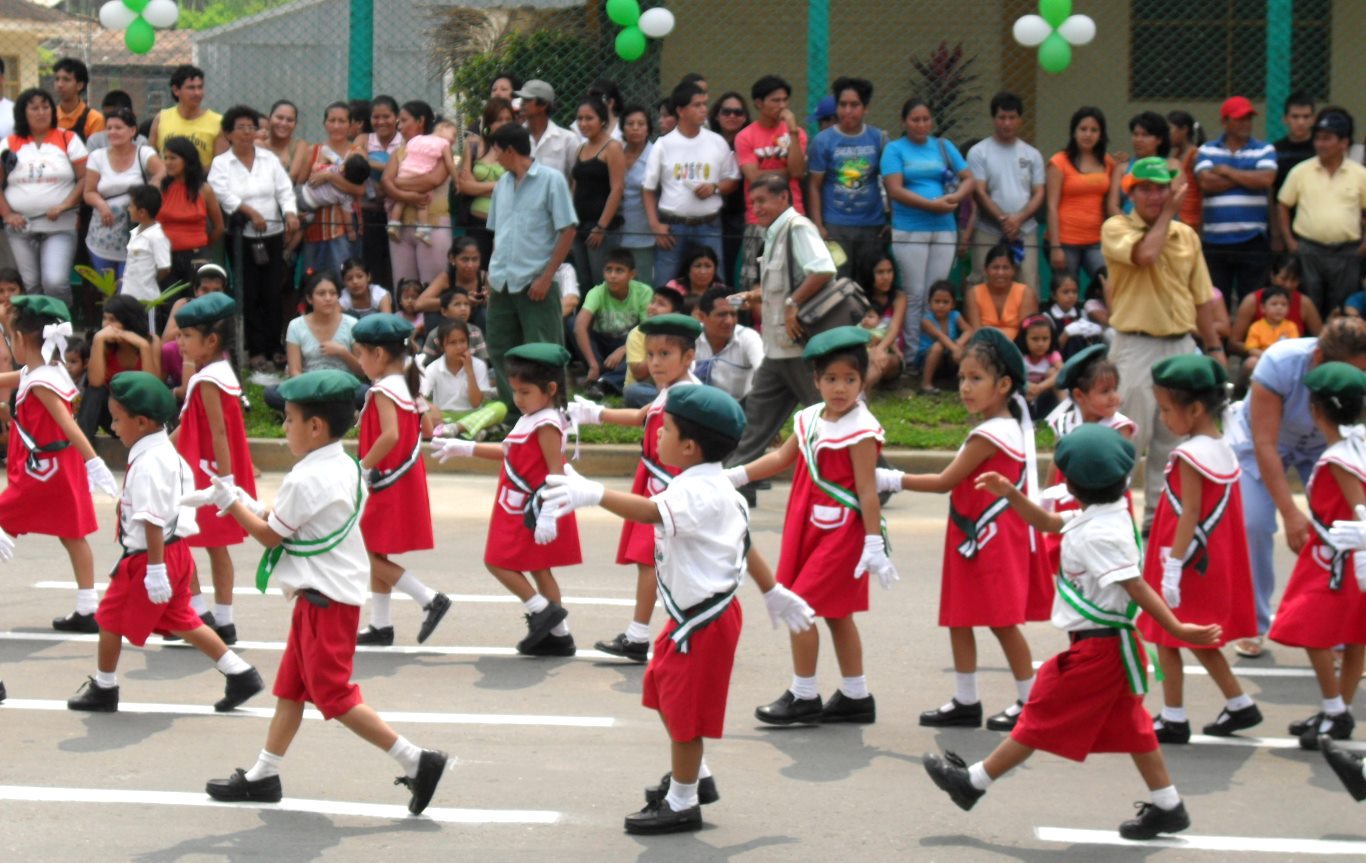 Dam kids, always running wild in the streets of Tarapoto.

These guys always turn up early. Like, 8 a.m. early, which is never a good thing. And every time they come round, I always seem to have a bad hangover. It’s like they can smell the scent of a life lived in sin wafting from my house into the street and think they need to get here extra early to save me.

It’s a conundrum with these guys. They’re so cloyingly sweet that I feel sorry for them at first. But it’s 8 a.m. and I should be in deep recovery sleep. Not peering out through my barely-opened front door at two healthy-looking young men wearing suits who should also be tucked up in bed with hangovers and a woman or two (or a man, or whatever).

So yeah, I give them about 20 seconds as I stare blankly at them while they smile and talk about Isaiah 8 chapter 6 or something like that. Then my bleary mind registers the full horror of the situation and I tell them I’m really not interested. “But do you think we can come in and talk more?” Um, that would be a “No.” Sorry, it’s just part of the whole really-not-interested scenario. But good luck with your search for souls. 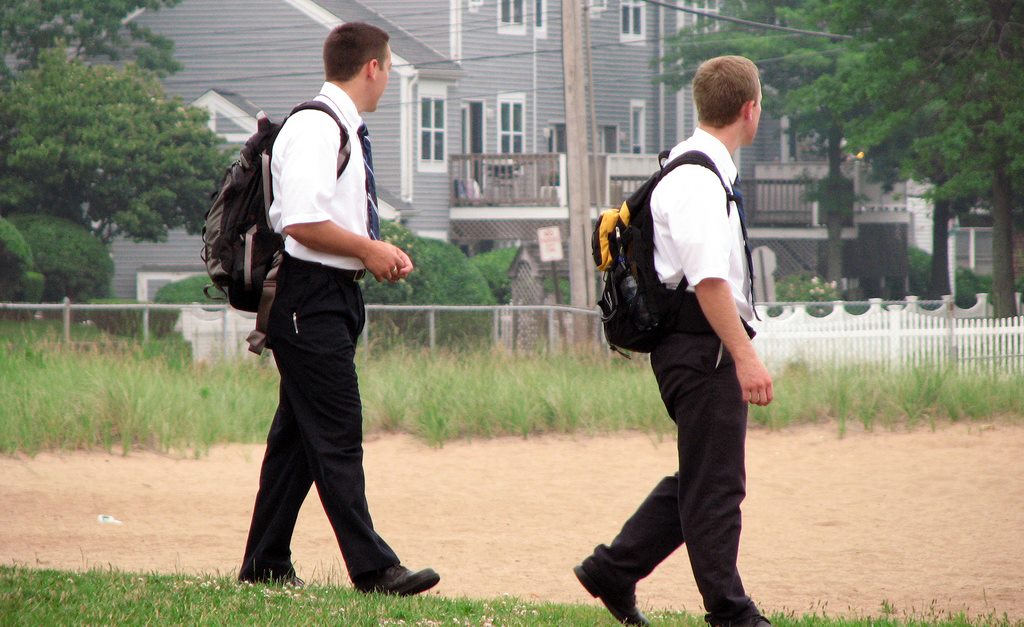 I’m sure you’re nice guys, but it’s 8 a.m. and I’ve got a nasty hangover, so excuse me while I hide. Photo by versageek, flickr.com.

People Who Want Their Fridges Fixed

You see, for the last two years, people have been ringing my doorbell to get their fridges fixed. And I sure as shit don’t fix fridges. I get things out of fridges, that’s about it.

Here’s how it normally goes:

FP: “They fix fridges here. My fridge is broken. I want it fixed.”

Me: “Yeah, sorry, I don’t do that. It’s somewhere further down the road.”

FP: “But they gave me this address. They say you fix fridges here.”

Me: “Man, seriously, this is not the place you’re looking for. It’s further down the road.”

FP: “But this is the address they gave me.”

Me: “Dude, if I fixed fridges — if that was my job — I wouldn’t be standing here in my boxer shorts telling you I don’t fix fridges. I’d be saying ‘Ah, great, sure, come in, I’ll fix that fridge for you because that’s exactly my main skill in life, I’ve trained for this shit, that’s exactly what I do.’ But I don’t. So go away.”

FP: “But does the man who fixes fridges live here?” [He’s now trying to peek through my slightly opened door, I guess expecting to see half-fixed fridges strewn around everywhere inside]

Me: “Do you think I’m trying to cover for some kind of rogue fridge repairman who lives in my house and only accepts certain fridges? Do you think there’s a secret code or something? Maybe you want to try giving me a password like we’re in a clandestine meeting between WWII resistance fighters in a corn field outside Lyon, so that then I’ll accept your fridge? But that won’t work, will it, because NO ONE HERE FIXES FUCKING FRIDGES!”

Yep, this happens about once a month, twice in a bad month. And to be honest I never shout or swear at anyone. I smile and be patient in a very English way. But it drives me up the wall.

I would put a sign up saying “We don’t fix fridges here.” But I reckon that would attract a whole new bunch of people ringing my doorbell asking “If you don’t fix fridges, what DO you fix?” 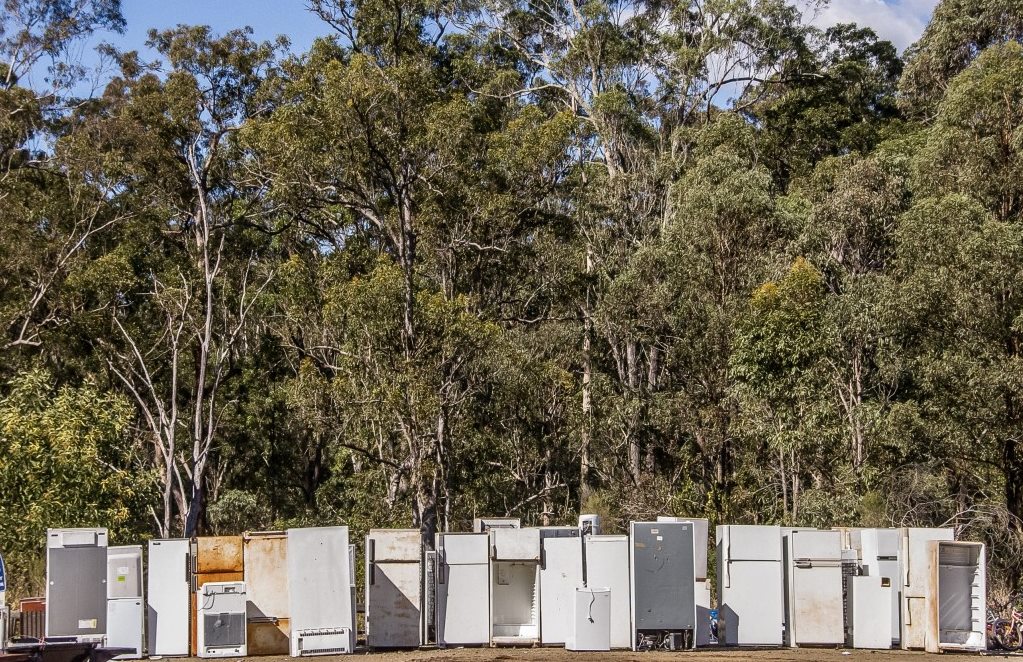 This is not my front garden. I do not fix fridges.