World Still Turning and Other News from Peru

Yep, as you may have noticed, the world did not end. Good.

And it was even better for some lucky kids in Ica, Pisco and Chincha, who actually had a day off from school due to the impending Mayan apocalypse. “It’s the end of the world again, son, no school today…” Brilliant.

In other school-related news from the tail end of 2012, primary school students in Bagua managed to snap a wonderful photo of their school director getting up to no good with a female professor (see report on Peru21). The image, understandably, has been quite a hit online:

Tarapoto, meanwhile, has been abuzz with news of Paolo Guerrero’s arrival in the City of Palms for the New Year period.

“Who the hell is Paolo Guerrero?” I hear you cry. Paolo is a Peruvian footballer (44 appearances for the Peruvian national team) currently playing for Corinthians in Brazil. In a recent poll by Uruguayan newspaper El Pais, the striker was voted the second best player in South America during 2012, coming in just behind Brazilian wonderkid Neymar. 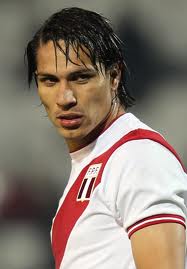 Anyway, Paolo Guerrero is a big star in Peru (and a hit with the ladies), so his arrival in Tarapoto is quite exciting. According to some rumours, Guerrero will be in Tarapoto alongside a representative from English Premier League club Chelsea FC, which is even more exciting.

There’s been some talk about Guerrero making the move to England following his success in Brazil. Will it happen? Possibly. Is he good enough to play for one of the biggest teams in England? I have my doubts, but I’d love to see another Peruvian become a success in the Premier League (we all remember Nobby Solano, right?).